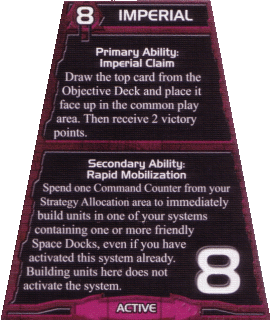 The 2 points from that card are massive, to the point where you can't afford to choose a different strategy card if that one is in the deck on your turn, or you almost certainly won't end up winning the game. Is there a way to deal with that? Are there any house rules that weaken it without messing up the game (e.g. only receiving 1 VP)? Or modifying some other part of the game such that the 2 VPs from Imperial aren't as game-deciding?

"Imperial" is Twilight Imperium's biggest design flaw (IMO, of course). As you'll typically get the card about twice in a game, and 2 vps is a winning margin in almost all circumstances, it makes the mid/endgame entirely about being the first person to grab Imperial for a second time. In turn, this forces choice of card 1 to get the initiative whenever possible, so you can take "Imperial". Which eliminates a lot of the interest provided by the actual strategies.

Your opinion is widespread, and the official Twilight Imperium variants FAQ has an "Ancient Throne" variant designed to deal with this problem. Play with the "Age of Empire" variant in the rulebook (i.e. face-up Objective cards), and replace the primary ability of "Imperial" with:

a) If you control Mecatol Rex, immediately gain 1 victory point. Also, regardless of your control of Mecatol Rex, during the upcoming Status Phase, you may qualify for any number of Public Objective Cards (but must still meet the individually stated requirements of each card).

Play the secondary as normal.

This became such a popular solution that they printed an "Imperial II" card with this wording in the "Shattered Empire" expansion.

The expansion also contains a more complex solution: It has a variant completely-different set of strategy cards for an alternate style of play; obviously this avoids the problem entirely.

As @Tynam mentions, the Shattered Empire expansion fixes this for 3rd Edition.

This is also fixed in 4th edition. The 4th edition Imperial card works like the Imperial II card from 3rd Edition; the operative piece reads: