How to stimulate more creative storytelling?

According to the blurb on the box,

Rory's Story Cubes® is a pocket-sized visual story generator that sparks the imagination of all ages. 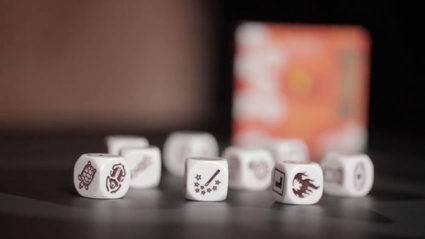 You throw 9 dice and then create a story that connects the images shown on the dice.

However, when I play with my kids, the game often devolves into "connect the dots as fast as possible", for example:

I found a number of "ways to play" on the Story Cubes website. Some just involve getting more or other dice and are little more then showcases or advertisements for different sets, but others are actually house rules, or alternate rules. I will be trying those out.

Also, while roll & play is the standard way of playing, it showed the icons on the dice do not need to be interpreted as literally as we were doing. No additional rules, but another way of using the existing rules.

I initially thought they were all just advertisements for different sets of cubes, but some of them offer the kind of additions to the rules I was looking for.

Of course, other ideas are still welcome.

Not the answer you're looking for? Browse other questions tagged house-rules rorys-story-cubes or ask your own question.

19
Creative handicaps in Settlers of Catan?
8
Making 2-player Starcraft more enjoyable
2
How can we make Don Bell more balanced?
13
How to expand Love Letter to accomodate more players?
6
How To Play Coup: The Resistance with more than one set of cards?
4
Playing Pokemon TCG with more than two players
3
How do I Make this Backgammon-Spinoff more Level and Fair?
3
Damage rarely matters in two-player RoboRally. How can I houserule it to be more interesting?
2
How could I prototype a board game with a variety of units using abstract icons?