What's the best strategy to win a tic-tac-toe variant on a 5x5-board?

First: We assume that every player is playing at its best

Player 1 begins and puts every turn one cross “X”.

Player 2 puts every turn two circles “O”. They don’t have to be next to each other.

A player wins as soon as he has five of his pieces in a horizontal or vertical line.

We also agree that player 1 “X” wins if the board is completely full. 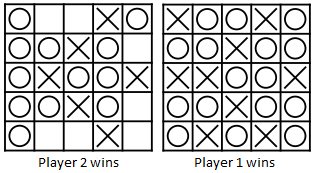 What is the best strategy for each player to win the game?

This is a generalized version of @Guvante's answer.

O (player 2) always wins in 4. The diagonals are not necessary to achieve a win.

Examples are included in bold, but this strategy works for all choices made by X.

This is what the board looks like at this point:

Since this is done in 4 moves, there's no risk of X getting 5 in a row so this is of no concern.

I have flip-flopped a few times, but think that Player 2 has an unbeatable strategy. The trick is that Player 1 needs an X in each row and each column while Player 2 needs a "box". Four O's that form a rectangle with no X's that share a row or column with said rectangle.

For instance the following moves show this algorithm:

X chooses the middle and then blocks the first box. However after this X is forced to make each move it makes (or an equivalent or inferior move). In fact past the second move the only moves that would change Os moves would involve immediate wins by O.

Player 1's strategy would be to block any three in a rows and always attempt to play in a row and column that does not contain an X, but that doesn't block the above from winning.

Not the answer you're looking for? Browse other questions tagged tic-tac-toe combinatorial-game-theory or ask your own question.