Fluxx - when is the winning condition reached?

I recently bought Cartoon Network Fluxx and have quickly become a big fan. I've been playing it a lot lately but we keep going back and forth on when the winning condition has been reached. Help?

Do you play it and win instantly or do you wait your turn?

The rules say: "The game continues until someone meets the conditions of the current Goal. That player wins instantly, no matter whose turn it is!"

The confusion comes from whether having the second card in your hand (not on the table) is considered meeting the conditions of the current Goal.

I think both cards must be on the table because the Goal rules say "These cards show the specific Keepers you must have on the table in front of you in order to win." but I don't totally disagree with the opposing theory that following that would make it much more difficult to win if you had a big group playing (only played with 2 so far) and thus it was likely never designed that way in the first place.

For the record, so far we have followed the rule as "wait until both are on the table" but we still keep wondering if we're doing it wrong and we'd like to know for sure.

So is it "no matter whose turn it is" or is it "on the table in front of you"?

Thanks for any help on this.

Do you play it and win instantly or do you wait your turn?

The cards have to be on the table, so in this case, sounds like you need to wait until your turn - you can't play the necessary Keeper when it's not your turn. Once you play it (on your turn), you win instantly.

In a different situation, though, you could win instantly, for example if the Goal changes into one whose conditions you already meet.

So is it "no matter whose turn it is" or is it "on the table in front of you"?

Goals are typically worded as follows:

The player with the X and the Y on the table wins.

If one of the required keepers is in your hand, you don't meet the goal's conditions.

The instant you do meet the goal's condition (i.e. the instant you play the missing keeper), you will win, but you can't just spontaneously play the card. You can normally only play cards on your turn (although there could very well be cards that allow you to play out of turn). 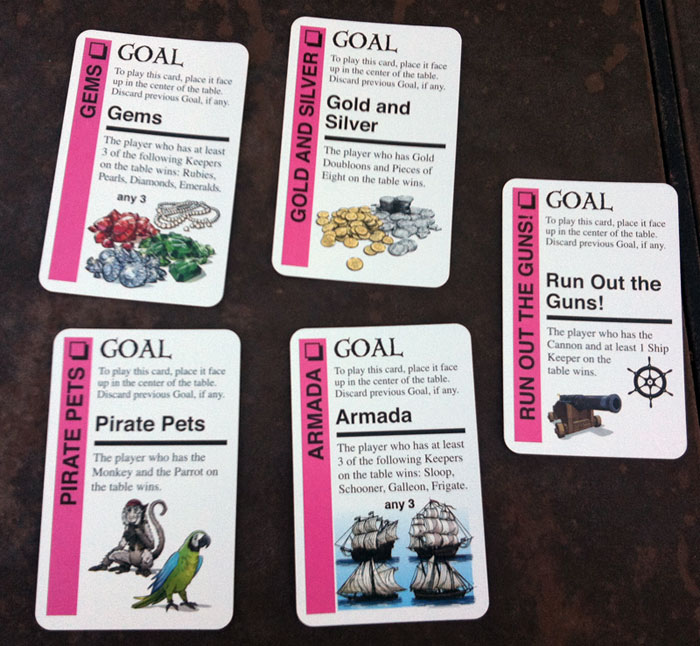 3
Fluxx - When should I carry out actions / use keepers?
19
What are the differences between the Fluxx games?
9
When is the winning condition checked in Fluxx?
5
Conflict in Fluxx
0
In Star Fluxx, how does the game end with Play all?
4
Brain transference in Star Fluxx
3
OZ fluxx Tin Woodman vs the Fighting Trees
5
Is the Radioactive Potato passed before the goal is checked?
3
Firefly Fluxx Upgraded Creepers