Is it possible for a person to lose "Pirate Islands" Seafarers scenario before the game even starts?

So here's where my question stems from: In the Pirate Islands scenario, each player starts with 3 settlements on the Eastern Island. A player only wins if:

a) he has captured the Pirate fortress of his color, AND b) reaches 10 victory points

There are no special victory points in this scenario besides basic expansion (no Longest Road, no Largest Army, and no VP cards from the Development stack since they are used as Knight cards)

Based on the confined locations of the map, it would appear that if you never are able to expand beyond your initial three placement on the eastern island, it will be impossible for you to win. Thus, the game could be over for someone before it even begins. 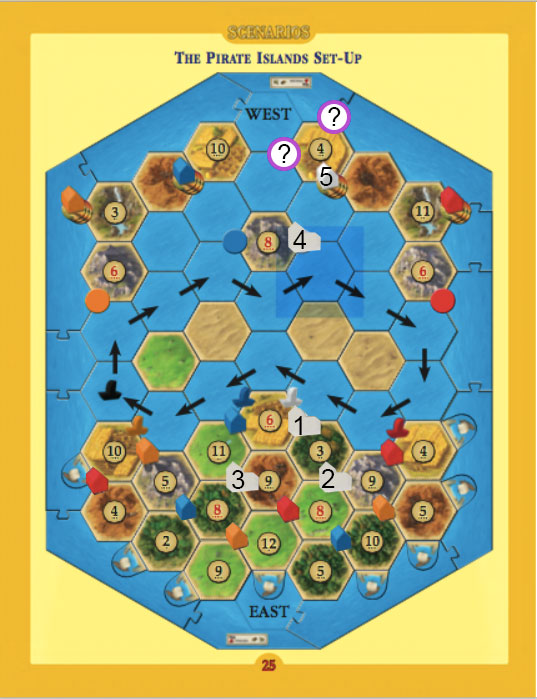 For example, in the attached image which simplifies the situation, let's say I'm White. I have been boxed in on the Eastern Island. I have built my maximum 4 Cities, as well as 1 settlement. These 5 locations are the only eligible spots for me to build. There is no way to get extra victory points, thus I will forever be stuck at 9 VP.

According to the rules...

In the second screenshot, it could be interpreted that the rules about additional settlements are only referring to the midway pirate island (i.e. I can't build another settlement on the "8 ore" tile)

Am I missing something? Has anyone else encountered this issue?

If you are not allowed to build additional settlements beyond the Pirate Fortress, I would call this scenario flawed. Any scenario where a player can lose before the first roll of the dice needs to be fixed, in my opinion.

This is a problem with this scenario in its current form. Sebastian Rapp, Catan's Product Manager, suggests lowering the points required to 8 since the point of this scenario is more to build ships and defeat pirates that to develop the starting island.

26
Can you build a road on the other side of another player's settlement?
29
What can I do to avoid being stuck being able to do nothing in Settlers of Catan?
6
Seafarers: The Fog Island -- discovering hexes with the Road Building Development Card
5
When can you start using the Pirate in Catan Cities and Knights / Seafarers?
3
Does the Pirate stop fish production when playing Seafarers with Fishermen of Catan?
5
Chit assignment in Catan: Seafarers, Scenario 8: The Wonders of Catan?
2
Victory Point Cards at the End of the Game
3
Is it possible to convert a settler ship into a settlement without moving and then build or is it considered a move?
1
Catan Seafarers - The Forgotten Tribe scenario : Who claims the harbor?