Confusion in Line and the Master Spy

In Guillotine, the Confusion in Line -action card says:

Choose a player. Randomly rearrange the line just before that player collects his or her next noble

After each action card is played, move this card to the end of the line. 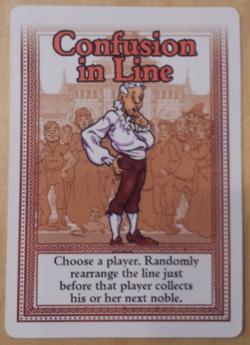 As Zags noted, user Robrob in BGG has asked a question from the makers of this game (WoTC)

and got a reply

The answer is B, there is no way to play a card to get the master spy to the front of the line without him just going back after the cards effects.

But this does not answer the questions, which will arise from the usage of Confusion in line -action card:

c) No action cards are placed on the table - Effect of an action card (Confusion in line) is triggered - Does the Master Spy move? - Noble is beheaded.

d) Action card is placed on the table - No effects of an action card is resolved (played Confusion in Line, +2 points at the end of the game, or similar) - Does the Master Spy move? - Noble is beheaded.

My conclusion is that Confusion in Line can move the Master Spy to a different position in line without him moving back. This conclusion is based on the principal that consistency of rules trumps authorial intent. The explanation follows.

As noted in this question, there is an official answer from Wizards of the Coast here:

There is no way to play a card to get the master spy to the front of the line without him just going back after the cards effects.

The Master Spy has the ability:

After each action card is played, move this card to the end of the line.

What this put together seems to imply is that the resolution of an action card is included in the playing it, and the Master Spy moves only after the card has finished it's resolution and has been placed face up in the play area or in the discard. Then, the Master Spy will move regardless of whether or not the card had an effect (so playing Fountain of Blood which is just worth two points but doesn't do anything will still cause the Master Spy to move).

Now we are left with two options in the case of Confusion in Line:

Option 1: Take the WotC's answer to the letter.

This means that we pay particular attention to their point that there is no way whatsoever possible in the who wide game to manipulate the line such that the Master Spy does not end up at the end. And there is your answer. You play Confusion in Line, and then the Master Spy ends up at the end.

This is an unsatisfactory answer because it isn't well reasoned. It's saying the Master Spy's ability trumps Confusion in Line's ability because... it just does. Author's intent is irrelevant without an official FAQ or card specific ruling. This is not how I play Guillotine. For that, move on to option 2.

Option 2: Use what we know about other WotC products (namely Magic the Gathering) to create a consistent rules framework for Guillotine.

There are three phases to a turn in Guillotine:

Confusion in Line creates a delayed triggered ability that takes affect in phase 2 of the turn of the player of your choice. It must be in phase two, because if it were during phase 1, a player could avoid the trigger by not playing an action card on their turn (in which case Confusion in Line would read "Randomly rearrange the line after that player plays an action card".

With this framework, we can also determine that the Master Spy moves to the end of the line at the end of phase 1. Thus, phase 1 (if the player chooses to have it) has the following steps:

Then, on the next player's turn, they play an action card and the Master Spy leaves your score area to go back to the end of the line :P (just kidding; although this might not be a joke since apparently "Clerical Error... end[s] the day and discard[s] all nobles in line if used to get Robespierre from someone else's score pile."; noble abilities working from score areas is a whole other rats nest that we will kick elsewhere).

Anyways, I like this option flavor-wise as well because it means even the Master Spy is thrown off by mass confusion (there is no good information for him to act off of).

Not the answer you're looking for? Browse other questions tagged guillotine or ask your own question.

33
How do you play the Master Spy in Guillotine?
4
In Guillotine, do Noble abilities work from the score area?

33
How do you play the Master Spy in Guillotine?
10
Do you still collect a noble if the day ends?
14
Can you play 'After You' when Callous Guards is in play?
13
Rival Executioner draws Robespierre…does this end the day?
5
Clarification on “After You…” card text
3
Late Arrival: What to do with the other two cards? (Guillotine)
4
In Guillotine, do Noble abilities work from the score area?
3
Guillotine: Action cards on the field