I was wondering what is the technically highest score one can achieve in Seven Wonders (with Cities and Leaders) in a 3+ player game, considering all players are working with the performer.

Has anyone heard of an algorithm that calculates that, or some information about it? I've tried get out my head around it but there are SO MANY parameters that I'm almost tempted to brute-force this solution.

Any ideas or information?

I'm back with 329 in a 7-player leaders, cities, wonderpack, promo leader game. No science used!

Wonders used are Great Wall (B) Left, Byzantium (B) West, Manneken Pis (B) You, Roma (B) East and Babylon (B) Right.

The full log of what is played each turn and how the money flows is in the picture below. I needed to included the Left and Right players to ensure there was enough money to flow eventually to you. Hopefully there are no mistakes, however happy to get corrections and/or improvements. 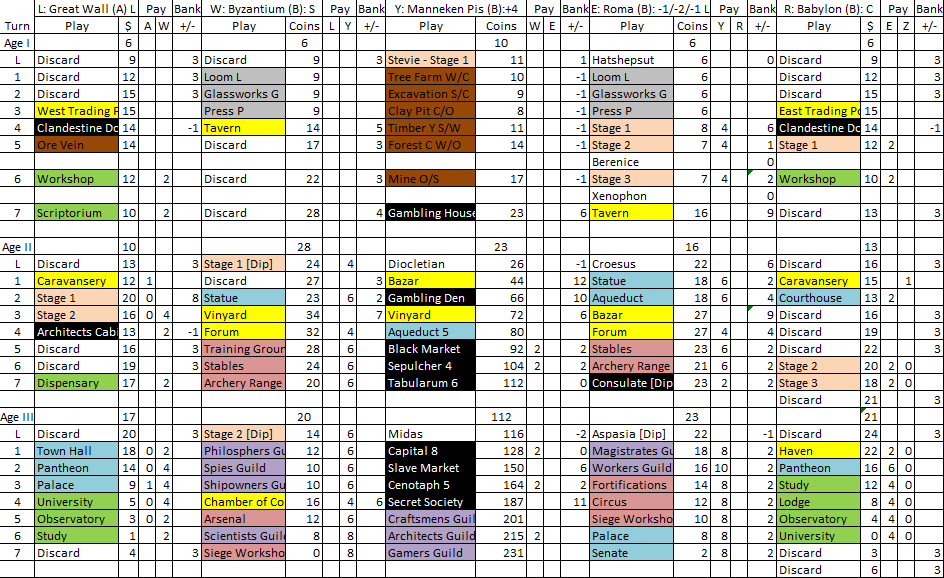 I believe I can get to 231 using the restrictions of the OP, being a 3 player game and only the Leaders and Cities expansions.

Wonders used are Byzantium (A) West, Babylon (B) You, and Roma (B) East.

Coins - 27 - finish with 82 coins from neighbours purchasing from you, Gambling House&Den and coins from chaining through Vitruvius Leader

The full log of what is played each turn and how the money flows is in the picture below. Hopefully there are no mistakes, however happy to get corrections and/or improvements. 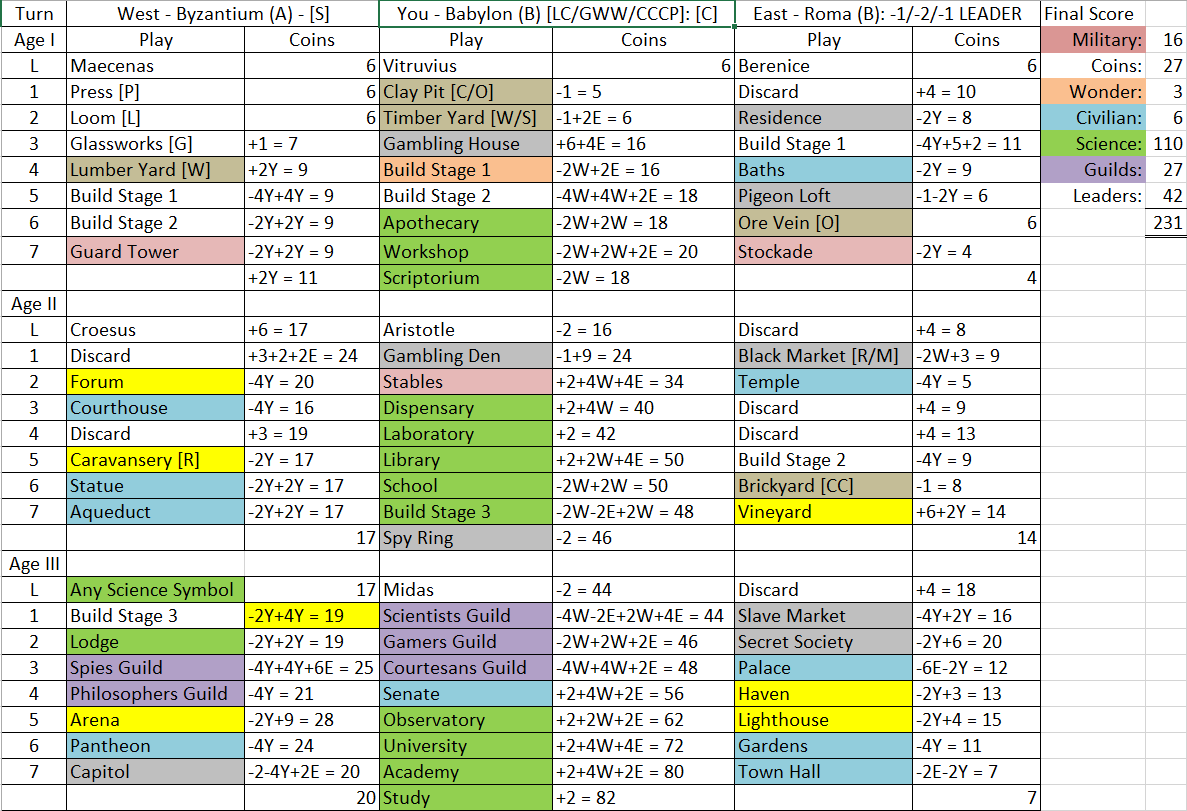 The strategy focuses on science, and grabs an easy 18 bonus points with a first age war card. See the image at the bottom of this answer for an example game.

The main player has the following goals:

The science, guild and spy cards, along with the 3 wonder stages, take up 19 of MP's 21 plays. This leaves 2 plays. Because MP has no starting resource, one of these plays should be a resource so that the neighbours can buy from MP. A clay pit (ore/brick) will be used in 6 of MP's core plays, saving the most money while providing variety to allow neighbours to purchase. The remaining free play is a first age war card to win all the wars.

My example uses duplicate Palace and Observatory, so requires 7 players.

This uses the 3 science leaders:

MP's wonder must be completed by the end of the second age as there are no spare plays in the third. Thanks to the choice of neighbours, you can end up with 3 science symbols from the MP. When MP copies from the Great Wall, MP chooses which stage to build.

Between them, MP's neighbours must do the following:

Using all 7 free choice symbols as a single symbol (cogs for this example), we have 12 of one symbol and 5 of each of the two others.

I'll put forward an approach that if nothing else will set a beginning bar. I'll start with some justification as to how I think you could get the cards you need, and then we'll add up the points at the end.

Let's assume that the gods are smiling upon you (or that your neighbors are idiots) first and foremost. They play the perfect cards, including ones that give you lots of money.

Let's also assume for sake of argument you are sitting next to Rome(B) so you pay less for leaders (and maybe China so you get more money). Let's also assume you got Babylon(B) so you get to keep your second card as well as a wild scientific. This will allow you eight cards each round.
You probably don't need 8 in the first round as it would cost too much.

Now, assume you get one of the three of the leaders that give you a scientific card (Euclid, Ptolemy, or Pythagorus), Ramses (free guilds), and Archimedes (the one that makes each scientific cost one less).

So, you start out with 3 coins (having paid one less for Archimedes).
Grab a Tavern
Then the Pigeon Loft (A spy mask),
Bury once (5 coins remaining).
If your neighbors played the right cards, you could pick up an additional three coins.
(China First wonder section, and Gambling Den, back up to 8).
Play a military (preferably the Guard Tower so you don't have to pay),
Pick up the three scientific cards (Apothecary, Workshop, and Scriptorium).
(7 cards, first age done).
Win both military battles, and proceed to round two.

Play Ramses or your scientific leader (4 coins gone, down to 4).
Ladder the three scientific cards (Dispensary, Laboratory, and Library),
Buy the School (down to 2 coins),
Have a neighbor play the Gambling House (back to 4 coins),
Get the Vineyard and make boatloads of money
(nice neighbors, you could make 10-14, so lets assume 18 coins now.)
Get the Architect Cabinent
(wanted to get the Spy Ring for the mask, but I think it's just too expensive, this should cost 3, and now your wonders are free)
Bury once (still at 9 coins),
Now you get the 8th card, which you should probably bury for the free scientific.
2nd Age Finished.
Win both military battles again (thank you neighbors).

Play your last leader (down to 5 coins).
Ladder all 5 scientific cards (Lodge, Observatory, University, Academy, and Study).
Pick up the Scientist's Guild (free scientific),
Play Courtesan's Guild (use a neighbors scientific leader),
At some point have your neighbors have purchased enough brick from you that you can afford the Torture Chamber for the final mask.
Third Age over.
Win the final two military battles.