Some games (like Chutes and Ladders) have a single track that players move along by rolling a die to see how far they travel. (These are often called roll-and-move games.)

Many of the spaces on a roll-and-move board are typically blank, just stepping stones on your way to the goal. Other spaces are action spaces, where something happens when you land there.

Are there common theories for how a designer decides which spaces should be action spaces?

Here's an example of the type of board I'm talking about: my own game Space-Venture. 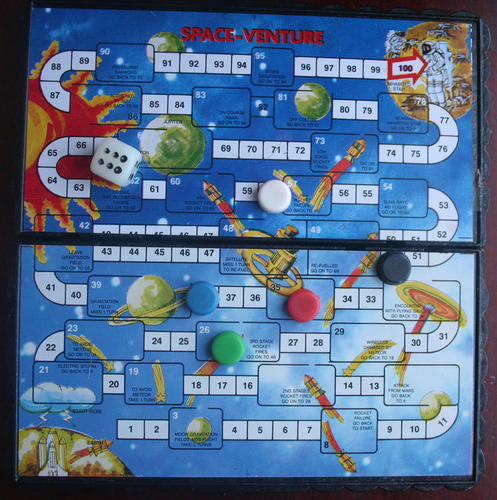 When you're looking at games like Monopoly or Chutes and Ladders, you're looking for fairness and equality. Everyone is at the mercy of the dice, and you should take the dice you roll (and the probability of something happening) into account when you roll them.

Taking Monopoly, for instance, you have spaces that are your usual spaces (which are your property tiles). When making a game with that in mind, and the fact that you want something to happen every now and then, you should space things out so the chance that someone will land on an action space is even enough. A roll of a 1d6 (one six sided die) is going to be much more different then 2d6. In fact, a 2d6 is going to be even more wildly different then a 1d12, since a 1d12 is all consistent (given the die isn't weighted) while 2d6 will produce more 7's than anything.

You have to also weigh in on if you want both negative and positive effects, only negative effects, how bad those are, ect... This all plays into how 'randomly' your spaces are hit. And, again, I will stress that the players have to be treated fairly in this regard. Since they cannot choose a path or how many spaces they move, you remove the tactical and strategic thinking from that aspect of the game. If it's something simple, like a child's game, then this makes sense. If it's more of an advanced game, you need to bake some tactics or decision making into the event spaces.

Not the answer you're looking for? Browse other questions tagged game-design game-development or ask your own question.

23
What's the easiest way to prototype a board game design?
12
Board game design dictionary
9
Formal Format for Documenting the Game Design Process
17
Players who can't seem to follow the rules — What can be done?
7
How does roll and move affect games like Talisman?
4
(Meta) game design to facilitate educational game design workshop/class
6
Is there an industry standard definition between “Board”, “Card”, and “Table Top” game genres?
7
Do board game publishers design games 'in house', or do they merely publish games by external designers?
6
Does this dice mechanic exist in other games and does it have any drawbacks?