In Arkham Horror, what card is shown on the bottom right of the board display of the rulebook?

The rulebook here shows a board layout on page 4. At the right side are the various investigator items (common and unique items, skills, spells, allies, etc). There are 11 cards stacked there. What is the bottom one that stands alone (not in a neat row of 5)?

It vaguely looks like the bank loan card but the title and word spacing implies to me that it isn't.

The only thing I can come up with is that it's supposed to be a discarded bank loan. 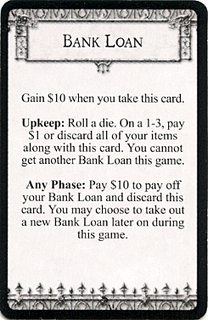 The paragraphs aren't 100% the same, but they're close. Pretty much the only substantial difference is the title, and putting the whole title on one line seems like an obvious thing to do. Seems likely they just didn't go update the image in the rules.

I say discarded because it's face up, and because the bank loans are the third card in the right column there. You can see the Bank of Arkham image on the back. That's also consistent with it being set apart from the others. (Of course, discarded cards are supposed to be discarded back to the bottom of the deck they came from, but maybe they weren't careful about making that image.)

It's a bit of a reach to make that inference, but there aren't really other good options. It's definitely the only small card in the base game that looks like that, and even the expansions I have don't include anything else similar. Bottom line, if that's not a bank loan, it's not anything that matters. There's not something else that looks almost exactly like a bank loan that you're missing.

For what it's worth, unless you're lucky enough to have a really huge table, I wouldn't bother splitting up all the odd investigator-related cards (Retainer, Deputy cards, etc) like they do in that picture. They're the kind of thing that you'll use at most a few times in the entire game, and most often just one or none, so you can just keep them all in a pile and go fish one out when you need it. Spreading out the location cards and giving each investigator some space seems much more important.

Not the answer you're looking for? Browse other questions tagged arkham-horror .