Are newer editions of Carcasonne compatible with older expansions?

If I have the new edition of Carcasonne with the river and abbot mini expansion, are all the old expansions still going to be compatible?

Mostly I'm looking for a compatible expansion that will add a 6th player and am wondering if Carcassonne Expansion 1 - Inns & Cathedrals will satisfy that. Surely this doesn't come with a 6th abbot piece for example (and I'm assuming different tile art as well?)

Looking at the New Edition FAQ I would guess that there is no sixth player abbot piece nor expansions with the new artwork.

According to the FAQ you linked, the tile backs are compatible. If you want to restrict yourself to the new art style just to make it look pretty, you certainly can, but you'll be limited to any expansions that get (re)printed with the new style in the future. So if you want expansions now, you pretty much have to ignore the art difference.

Among the older expansions, Inns & Cathedrals is the expansion that actually adds the sixth player's basic meeples, so it's the only expansion that will really satisfy that need. True, it doesn't come with an abbot piece, but you can find a placeholder. (You could also omit the abbots entirely when playing with six players; people have been playing just fine without them for a long time!)

Some other expansions are then compatible with Inns & Cathedrals. For example Traders & Builders adds builder tokens and pigs, and they come in all six colors. Plenty of other expansions don't add anything player-specific at all, so they'll be fine as well. (I won't try to list them all right now; you can look at a list.)

All that said, Carcassonne isn't exactly the best six-player game. You can end up with a lot of downtime between your turns unless everyone plays quickly. Each player also doesn't get to play very many tiles, which means they don't place very many meeples, they don't score very many times, and can't be very efficient.

The base game including the river is 84 tiles; if you get say Inns & Cathedrals (18 tiles) and Traders & Builders (24 tiles) you're up to 126, giving each player 21 tiles to play. Even if you play a meeple on every single tile the game will be 1/3 over before you get them all down. If you want to complete your cities, you'll probably be stuck making a lot of small ones. And it feels pretty random; with five other players taking a turn before you get to go again, you have very little control over the things you start to build. Rare tile shapes are basically impossible to get. (Good luck with the four-sided city tiles!)

If you really want to play Carcassonne with six players and still have a serious game, I'd suggest playing with people who are familiar with the game and can play pretty quickly, and buying a lot more extra tiles. That might mean multiple copies of one of the large expansions or even the base game; you'd be buying them for the tiles, not for the extra mechanics.

I just bought inns and cathedrals today and the new set of needles does include an abbot piece.

The are now expansions that fit the artwork of the new edition and the first expansion does come with a 6th abbot piece. Here is an image of the back of the box showing the 6th abbot piece 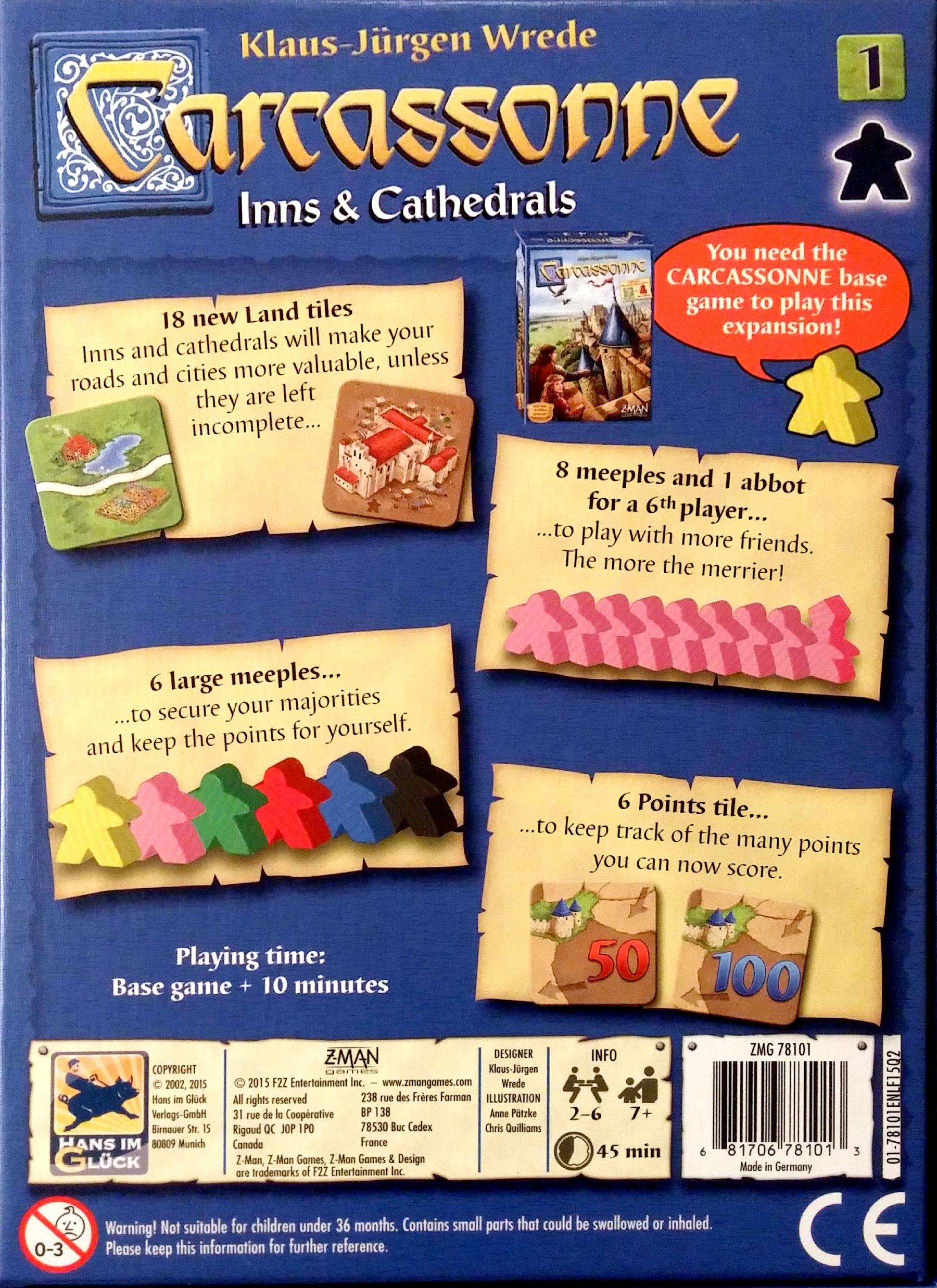 Here is a link the the Inns and Cathedrals expansion and the Traders and Builders expansion with the new artwork. It looks like it is only these two expansion so far.

Carcassonne is very mutable. But yes the new game is compatible with all the old expansions. Including adding in a 6th or even a 7th or 8th player. Of course the more players you add the more difficult it becomes to keep people focused on the game and have everyone enjoy it. You can buy the extra pieces you need cover the 'missing' ones for extra players.

Most expansions come with the pieces for all six players, I don't know why on this latest version they went back to 5, unless they really feel 6 is becoming to awkward without at least several expansions to help increase the number of pieces everyone gets to use.

The artwork on the new set is different but it still matches up with all the older expansions. But chances are you will need to buy they extra missing meeple separately. (or create your own tokens)

Not the answer you're looking for? Browse other questions tagged carcassonne expansions .