Today we were playing Carcassonne with two of the mini expansions, Flying Machines and Ferries. The following situation occured: 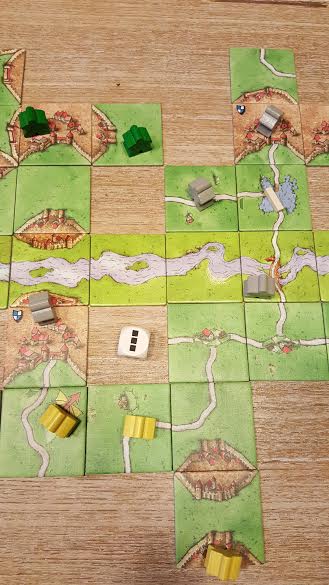 The yellow player is launching one of his meeple from the bottom left corner and rolled a 3. This puts him on the ferry piece. The ferry is connecting the bottom and left sides of the lake.

The questions we had now, are these:

To answer the first half of the question:

If possible, the follower must be placed on the resulting landscape tile representing the end of the flight. The active player can choose which feature to place the follower on. However, the following rules must be followed:

The ferry connects the ends of the road to form a continuous road. A road segment without a ferry on a lake is closed at this end.

According to your picture, at the time the road from the lake to the city is considered to be complete at the time and as such the flier could not be placed there. The remaining two segments which each have the ferry attached are legal locations to put the flier.

It continues to read:

[364] The road must include a wooden ferry to allow movement of that ferry in this situation. Thus if adding onto a road that ends at a lake without the wooden ferry connect, the ferry cannot be moved.

[366] The RGG version of the rules incorrectly adds "if he placed a follower on the road" here, even though there is no such stipulation in the body of the rules.

[367] The RGG version of the rules incorrectly adds the requirement "if he placed a follower on the road" here, even though there is no such stipulation in the body of the rules.

It is my understanding then that the only reason why you will ever move a ferrry is because of the road connected to the ferry extending through the addition of a landscape tile that connects to the road. As the tile placed in the turn in question did not in fact extend the road connected to the lake, the ferry may not be moved. Nowhere does it mention that having placed a follower on the road (but not extending the road) will allow the ferry to be moved.

While I understand @JMoravitz his interpretation (and fully agree on the first part), I think it would be possible to see the placement of a follower onto the lake tile as part of this sequence of actions:

Where you basically start at step 2, because step 1 was done by someone else. If that is the case, you could still move(/place) the ferry.

The only reason I think this might be a valid interpretation, is because of the ambiguous wording "sequence of actions relating to lakes and ferries".

On a side note, the excessive wording in the annotated rules seem to overfit for known scenarios and therefore force unknown scenarios into directions that might not have been intentional.

Not the answer you're looking for? Browse other questions tagged carcassonne .