Carcassonne - taking control of a city

We have just started playing and have the river expansion game.

I had hoped to try to take control over a city by placing a last wall piece and placing a meeple. This was a U shaped piece and no tiles where in the interior city....just walls. I was told I could not because it joined other walls of the city and was an end piece. I'm confused as to how one would take over a city and gain all the points.

Let's assume the situation is this: 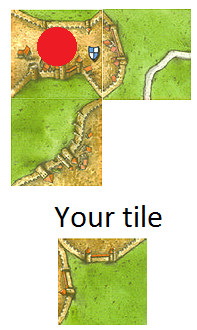 In the situation that you have presented you have placed your tile to close a city. Once that tile is placed, looking at the board, it is already controlled by another meeple, therefore you cannot place a meeple there. 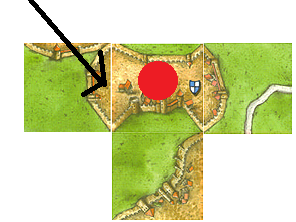 To take some control of a city requires two moves. The first is to place a tile that is not connected to the city that you want to control, separated by a single tile space from the city and place a meeple on that city. On a later turn, play a tile that connects the main city to the small city you created on the previous tile. 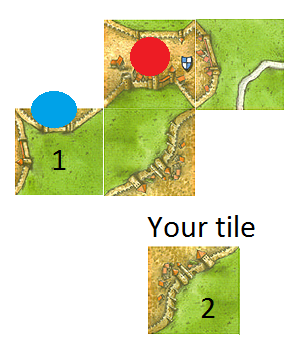 This would give blue and red equal control, splitting the points. To take complete control would require you to perform this step again. (Or a big meeple from Inns and Cathedrals)

Assuming that the feature is uncontrolled.

Place the tile. The city is uncontrolled, so place a meeple. Score the completed city. 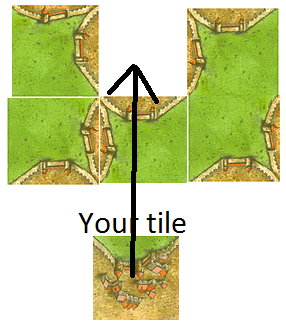 The order of actions in a turn is as follows:

So your city is not completed until after you've had a chance to place a follower onto it. So in your example, you were right.

10
Can Expansion Combining “Break” the Game?
5
Can a Cloister be scored if one tile is an all-city tile in Carcassonne?
19
How can we use multiple Carcassonne expansions without the game taking forever?
11
Carcassonne Completed City
7
Carcassonne Flying Machines + Ferries
7
Carcassonne: two builders on the same city?
3
Carcassonne builder and bazaars
9
How many unique outcomes can be made from the 12 river tiles in Carcassonne?
4
2 Mayors in a city…how to score?