What's a good use for Chancellor?

I'm having a hard time figuring out when Chancellor is useful. Forcing a reshuffle of the deck just seems of little use to me, at least relative to the other actions I could buy with 3 coins.

I've seen a few suggestions that Chancellor is useful when paired with cards in some of the other expansions, but can you help me see how it could be useful in the base game? 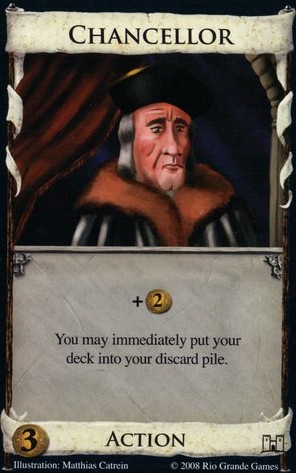 +2 Gold. You may immediately put your deck into your discard pile. (Cost 3)

You just need to gain a clearer picture of the circumstances in which forcing a reshuffle of the deck is useful. Imagine that:

Obviously he has a big downside, in that he takes up an Action. But, if you weren't going to spend that Action on anything else, he's all upside compared to a Silver. Early in the game, before your deck is filled with good Action cards that you really want to play, and when you have a clear idea of the total composition of your deck, the Chancellor is probably just plain better than a Silver. And never underestimate the power of getting off to a good start in the early game!

15
What's a good counter-strategy to Workshop/Garden?
5
Choosing between Shanty Town and Village when both are in the Kingdom set?
5
When you use Chancellor to discard your deck, do you gain a gold for each Tunnel discarded?
9
How can I minimize Black Market set up and clean up time?
4
Is the Chancellor + Harbinger combo a viable Dominion strategy?
0
Dominion: How exactly do cards "enter play"