Is using Quickshade a good way to finish miniature painting?

Recently I've discovered that Army Painter is selling a can of pigmented varnish called Quickshare. Has anyone had any experience with this or other similar products? On the pictures I've found models finished with this stuff look really amazing, but I'd like to know if it's really that good, or were the pictures Photoshopped? 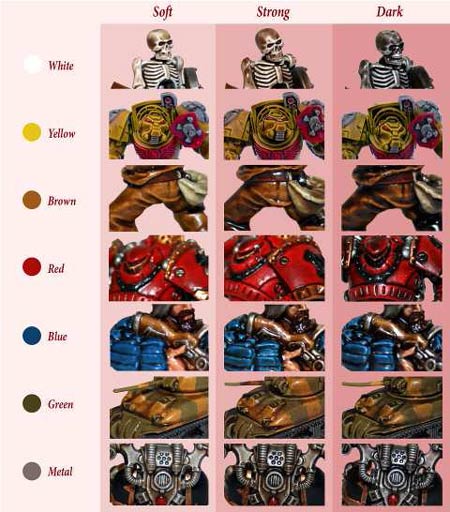 I have used Quickshade and the much cheaper but equally effective Minwax polyshade on roughly one hundred miniatures. This pictures most definitely are not Photoshopped, but it's not quite the magic bullet as it seems.

While it certainly is a way to quickly finish a large number of models there are a few disadvantages:

1) It leaves a gloss finish on your model that, except in a few cases, is generally undesirable, which requires the application of a matt varnish to eliminate. Often times, though, you will want to protect the paint anyway, so it may or may not be an extra step.

2) It requires a bit more prep work. Mold lines on your models, along with any imperfection, become accentuated with Quickshade, but again, that's the case if you use a wash anyway.

3) It's messy. I brush the stuff on, but the technique is called "dipping" because the technique first involved dipping the entire model into the poly and then shaking/spinning it to remove the excess. In my case, after I get it on, I carefully brush off the excess, but it can easily pool in certain recesses.

It's a great way to get a large number of figures painted and ready for the tabletop quickly. A small container of Quickshade is roughly thirty US dollars, and the Minwax Polyshade (I prefer Tudor Satin), is about 8 dollars for a few pints.

Here is how I do it: http://hivezero.blogspot.com/2010/09/speed-painting-tyranid-termagant.html

There are a ton of other tutorials and galleries on the web. Search "40k dipping"

The photos aren't photoshopped, but the results are particularly dramatic in the example work the OP included.

Any wash can be used to do similar, and a black "inkwash" (black paint thinned to ink consistency) is similar to the dark varnish, but without the excess glossiness.

A less expensive option is any thin & colored varnish that isn't going to liquify the paint beneath... and that is the trick. As most varnishes are thinned with solvents, you need to make certain that the paint you are using won't be disolved by the varnish. Minwax is traditional, but others will work.

Also, learning to apply it evenly, and to dry it effectively, is an art all it's own.

In competent hands, it can be a wonderful tool... but it will take practice, and it's not easily removed as an inkwash.

Not the answer you're looking for? Browse other questions tagged miniatures or ask your own question.

5
Miniature painting - what does it mean to seal the model?
6
How to identify miniature parts that correspond to in-game enhancements?