How does US/UK scoring work for the invasion of Japan?

In the game Churchill, how does US/UK scoring work for the invasion of Japan? We've been poring over the rules, coming to several different conclusions.

If all US/UK fronts invade Japan at once, how many points do the US/UK each get for the invasion:

Japan can be invaded by four different fronts: the USSR from the north, and the US/UK from the west, south, and east. For this question, we can ignore the northern front. 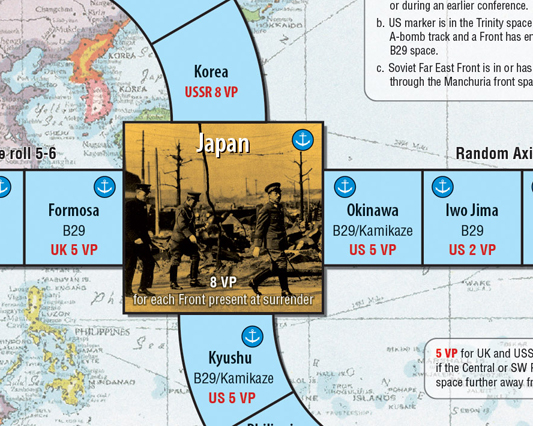 At the end of the game, anywhere from zero to three of these fronts could be occupying Japan. According to the rules (p 18):

and, regarding how many points players get if Germany/Japan surrender:

So let's say all three fronts have made it into Japan (since we're ignoring the northern front). How many points is that worth for the US/UK?

24 points seems unlikely, because that's an enormous number of points to get, in a game where the US/UK get only 8 points for conquering Germany.

8 points seems unlikely, because that would mean the US loses two points for invading past Kyushu and Okinawa.

How does the scoring actually work?

How many points does a player receive for Japan surrender if they have more than one front in that Axis country?

Per rule 9.4.G each player receives 8 VP per Axis Country (NOT front) where they have a Front. So, if the US Central and SW Pacific Fronts enter Japan during the same conference the US and the UK receive 8 VPs each , NOT 16. If in addition to this example the CBI Front also entered Japan, the same outcome would pertain. Additionally, since you only receive VPs for the last space that a front occupies this can lower a player’s potential score in some instances and is a known and intended result.

Not the answer you're looking for? Browse other questions tagged churchill or ask your own question.