Can you cast Hangarback Walker for X=0 and have it survive with Hardened Scales?

No, and for a very straightforward reason: Hardened Scales requires that at least one counter be placed on the creature before it adds any additional counters: 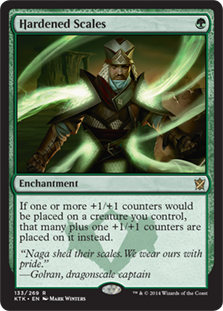 The key text here is 'If one or more'. You're trying to put zero counters on the Hangarback Walker, and so Hardened Scales never processes.

If you want to play Hangarback Walker for free, there are options:

Graft is not an option. Though the triggered effect of the creature will happen, state based actions will kill the 0/0 Hangarback Walker before the trigger can be placed on the stack.

I would just like to add to Steven Stadnicki's answer that even if it was a triggered ability that put counters on creatures when they enter the battlefield it still will not work.

State base actions would see a creature with zero toughness and it would be put in the graveyard before the triggered ability gets a chance to put any counters on it.

So lets say for instance instead of the scales you had Aquastrand Spider it still would not work for the reason I stated.

6
Is there a conventional way of searching for lands in a mono-red deck?
5
Does doubling counters trigger Hardened Scales?
3
Double Hardened Scales
3
Who wins when everyone takes lethal damage simultaneously?
2
Does Persist, Modular, and Hardened Scales give me an infinite loop?
5
Lathliss, Dragon Queen + Where Ancients Tread interaction
7
Can I copy Ulamog, the Ceaseless Hunger's ability twice with Strionic Resonator and Rings of Brighthearth?
1
Can a deck with a mono-colored commander have cards with other colors than its commander in it?