When does an opponent make the decision to pay extra mana in response to a spell?

I have a rules question. Let's say I have 2 Judge's Familiar's in play and an opponent casts Lightning Bolt on another one of my creatures. In response, I sac one of the Judges to counter the spell. Here are the questions: 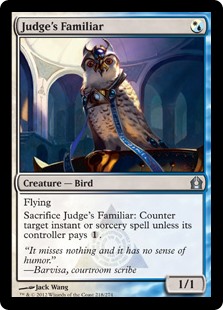 Here are the rules on who gets priority when:

116.3. Which player has priority is determined by the following rules:

116.3b The active player receives priority after a spell or ability (other than a mana ability) resolves.

116.3c If a player has priority when he or she casts a spell, activates an ability, or takes a special action, that player receives priority afterward.

116.3d If a player has priority and chooses not to take any actions, that player passes. If any mana is in that player’s mana pool, he or she announces what mana is there. Then the next player in turn order receives priority.

5
Can I sacrifice a permanent to pay an ability cost while the permanent's spell is still on the stack?
27
Does priority matter in Magic?
5
Should a judge assume that any triggers not mentioned have been missed when providing a ruling?
8
Do you have to choose a target for a spell, or can you just cast it with no target and let it fizzle?
4
What is the use of Swift Silence?
2
When do spells go to the graveyard?
3
Can I have priority passed back to me during spell resolution, so that I can do more with my own spell?
18
Can a spell fizzle because a cost-reducing effect is removed?