Does Doubling Cube's ability affect the mana used to activate it?

Rules Question: When Doubling Cube doubles mana, does that include the mana used to activate the ability? 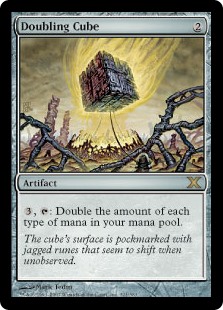 No, Doubling Cube does not copy the mana used to activate it.

When you activate an ability you pay costs before the ability takes effect. Specifically, rule 602.2 describes the steps for activating an ability:

601.2h The player pays the total cost in any order. Partial payments are not allowed. Unpayable costs can’t be paid.

601.2i Once the steps described in 601.2a–h are completed, the [ability becomes activated]. Any abilities that trigger when a spell is cast or put onto the stack trigger at this time. If the spell’s controller had priority before casting it, he or she gets priority.

Normally, players would get a chance to respond before the ability resolves, but Doubling Cube's ability is a mana ability, so 605.3b says

An activated mana ability doesn’t go on the stack, so it can’t be targeted, countered, or otherwise responded to. Rather, it resolves immediately after it is activated. (See rule 405.6c.)

If an effect requires information from the game (such as the number of creatures on the battlefield), the answer is determined only once, when the effect is applied. [...]

This means that the Doubling Cube checks the mana to be doubled when the effect resolves, which is after you spent the 3 mana on the ability's cost.

In order to activate an ability (or cast a spell), you first have to pay all costs. By the time it resolves, the mana costs in particular have already been deducted from your mana pool, so the mana you spent to activate Doubling Cube cannot be doubled by its ability.