Lets say the rules are Draw 1 / Play 4, and the Swap Plays For Draws promotional rule card is in play: 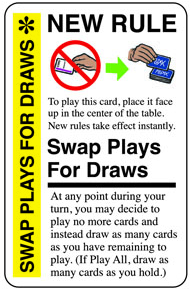 My turn begins and I have zero cards in my hand. So I draw one card.

If I now want to make use of the Swap Plays For Draws rule, how many cards should I draw?

The rules say "Play 4", but I can only play one card, because I only have one card in my hand. So should I draw 4 cards or one card?

Also, if I first play my only card, can I after that use the Swap Plays For Draws rule and exchange my remaining 3 plays for 3 draws (even though I don't actually have 3 more cards to play)?

This is answered in the Fluxx FAQ: http://faq.looneylabs.com/question/272

if you have 3 plays left, you get to draw 3 cards, even if you only have 1 card left in your hand. Of course, now you’ve used up your plays, so you can’t play any of those cards on the current turn.

This is a good question, and the answer basically depends on how one should interpret the phrase "as many cards as you have remaining to play" in the card text.

Alas, both of those interpretations seem plausible on the face of it, and the Fluxx Rules don't seem to provide any explicit guidance on the matter. The only even marginally relevant bits in the rules that I could find are the following FAQ entries:

Q: What if the Rules require me to Play 4 but I only have 2 cards?
A: Play as many as you can. Your turn ends when you have no cards left in your hand, even if you are supposed to play more.

Q: How do I interpret the Play All card? If, by playing my cards, I receive more cards in my hand, do those new cards have to be played as well, so that I will always end up with zero cards in my hand at the end of my turn as long as Play All is on the table?
A: Yes.

A strictly literal reading of the former entry ("Your turn ends when you have no cards left in your hand") suggests that, regardless of the interpretation chosen, you cannot actually activate Swap Plays For Draws after playing the last card in your hand, since your turn will already have ended!

On the other hand, it doesn't specifically say that the number of cards you "have remaining to play" is limited by the number of cards you have left in your hand — it just says that your turn ends when your hand runs out, even if, by the current rules, you're supposed to play more cards. Thus, while this reading is arguably more consistent with interpretation #2 above, it doesn't actually contradict either of them. And it's IMO not even clear whether this FAQ entry is really meant to be read that literally.

The only reason I have for quoting the second FAQ entry is to emphasize that the special rule that Swap Plays For Draws has, when combined with Play All, is, while sensible enough (at least when compared to the alternative of drawing the whole deck), not actually an accurate match for how Play All normally works.

Normally, under Play All, you'd be able to (and would have to) keep playing until you literally cannot play any more cards, and literally combining this with the basic Swap Plays For Draws rule, without the special exception, would effectively have you draw the whole deck (and the discards too!) until there are no more cards to draw. Instead, the special rule for Swap Plays For Draws + Play All in the parentheses just has you count your cards to determine the draw/play amount — which is exactly how the FAQ entry says Play All does not normally work. Thus, whereas the first FAQ entry above might be taken as an argument in favor of the second interpretation, by similar logic this one would seem to be an argument against it.

Thus, pending a clarification from the designers, I'd have to say that this is something your table may simply have to make a ruling on, and stick to it. FWIW, I don't think either choice will actually break the game, although they do each offer a different set of strategic options.

In your first scenario, you've drawn one card, played one card, and the rules are now: Draw 4 Play 1. So, to make up the difference you draw 3 and since you've already played one, your turn is over.

If you start with 1 card, you draw a card, play a card, then play the Swap Rule. At that point, you've drawn 1 card, played 2 cards. The rules are now: Draw 4 Play 1. So, to make up the difference you draw 3 and since you've already played two, your turn is over.

9
When is the winning condition checked in Fluxx?
10
Does Play X go into effect immediately?
6
Is Fluxx a game of skill or luck?
19
Do I win or lose if I play “Trade Hands” while tied for “10 Cards in Hand”?
3
Fluxx: Does this person play all cards or does his turn end with new cards in hand?
0
In Star Fluxx, how does the game end with Play all?
6
Fluxx: Hand limit zero + trade hands
5
Play all but one rule is into play. What if play one extra card rule is also in play?
17
Play all but one + hand limit zero + draw one = stalemate?
2
Exchange keepers