Do Surge triggers happen "on cast" or when the spell resolves?

Consider this new card from Oath of the Gatewatch -- Crush of Tentacles.

I realize the first part -- "Return all nonland permanents to their owners' hands" -- happens when the spell resolves, but what about the second part of the card text -- "If Crush of Tentacles surge cost was paid, put an 8/8 blue Octopus creature token onto the battlefield."

Does that trigger when the card is cast or when the spell resolves? 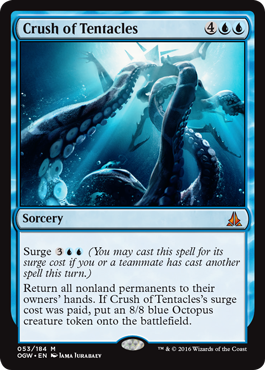 When you are resolving the spell, rule 608.2c says

The controller of the spell or ability follows its instructions in the order written. [...]

so the Octopus token enters the battlefield immediately after the other creatures return to their owners' hands, and it does not itself get returned.

The Surge effect will occur when the Card resolves, since it is in the same paragraph as the spell's effect, per 112.2c.

112.2c An object may have multiple abilities. If the object is represented by a card, then aside from certain defined abilities that may be strung together on a single line (see rule 702, “Keyword Abilities”), each paragraph break in a card’s text marks a separate ability. If the object is not represented by a card, the effect that created it may have given it multiple abilities. An object may also be granted additional abilities by a spell or ability. If an object has multiple instances of the same ability, each instance functions independently. This may or may not produce more effects than a single instance; refer to the specific ability for more information.

If it were to happen when you cast the spell with Surge, it would be worded more like Genesis Hydra:

When you cast XX for its surge cost, do this thing.

603.1. Triggered abilities have a trigger condition and an effect. They are written as “[Trigger condition], [effect],” and begin with the word “when,” “whenever,” or “at.” They can also be expressed as “[When/Whenever/At] [trigger event], [effect].”

Crush of Tentacles doesn't say “when,” “whenever,” or “at,” it says "if". Thus it can't have a trigger. Consequentially it must do it's thing when it resolves.

4
Do I still get to draw cards if I can't sacrifice Soul Ransom when its ability resolves?
15
Will transforming Thing in the Ice with a token-summoning spell bounce my tokens?
1
How does exiling cards for Delve work?
4
Will countering a spell that left the stack still trigger abilities?
6
Is cascade triggered by putting a creature into play?
5
What happens when one target of Paradoxical Outcome becomes illegal?
5
How will Gadwick remember the actual amount of X mana spent?
21
Can Veil of Summer force an opponent to target their own creatures with Swift End when Lucky Clover is on the battlefield?
3
Can Coastal Wizard bounce multiple other creatures?
0
Moss-Pit Skeleton and Skyclave Shadowcat - sacrificing as cost of a triggered ability and triggering another ability when the first one resolves