What is the difference between Owning and Controlling an object on the Battlefield?

I’m a little confused on what the outcome of this scenario is – any help would be appreciated.

Let’s say I cast Turn Against on one my opponent’s creatures. So I would “Gain control of target creature until end of turn.” However If I use the ability of Eldrazi Displacer on the same creature after gaining control which says “Exile another target creature, then return it to the battlefield tapped under its owner's control.” Will this creature become mine forever?

I assume that the effect of Turn Against only applied to the first instance of the creature I targeted. Then when I use Displacer’s ability a new version on that creature is placed on the field and all equipment etc. is removed including effects from spells?

If this doesn’t make sense – please let me know.

You won't ever become a creature's owner in a game if you already weren't.

So, when you use Turn Against on a creature, you become its controller, not owner. If you used Eldrazi Displacer's ability on the same creature, it would return under your opponent's control, since he owns this creature.

To answer your second question, let's assume that you somehow retained control of the creature that you blinked with Eldrazi Displacer. The creature would not return to your opponent's control at the end of the turn. This is because an object that changes zones, even if it returns to the same zone it came form, becomes a completely new object every time it changes zones.

There are seven exceptions to this rule, and none of them apply here.

The ruling on the card on the gatherer website says:

After the creature returns to the battlefield, it will be a new object with no connection to the creature that was exiled. It won’t be in combat or have any additional abilities it may have had when it was exiled. Any +1/+1 counters on it or Auras attached to it are removed, and any Equipment will no longer be attached.

To answer a couple other parts of the question, any auras and equipments, when you gain control, stay on the creature, but are actually controlled by your opponent. Normally they can't do much, but it depends on the cards.

When you use the Displacer's ability, since it leaves the battlefield and returns as a "new card", the auras and equipments are unattached. This also does apply to spells targeting the creature. Once the blink is done, the original target of the spell is no longer there (now a new card) so it should fizzle.

In such a situation, you are not the owner of the card - although you may control it - and you could not become owner of that card in no legal way. The "owner" of a card is, generally and according to the rules, "the player who starts the game with that card in his deck" - as established by rule 108.3, although with one important exception, which I will discuss later.
He is therefore the owner of that card because that card simply "belongs" to him, since he probably bought it previously, or obtained it through an exchange between players.
The "controller" of a given card is instead who, during the game, actually controlling it; because, firstly, the general rules and those written on the cards give him control of that card , which at this point can be either a spell still on the stack, or a permanent on the battlefield.

I remember that,in old MTG times (in 90's), it was possible to become owner - not controller only - of a target opponent's card. But it was possible only announcing you are playing with ante before start playing. Then, you are allowed to become owner of a card when some kind of card expressely told you this.It happened with old black cards like Contract from below, or Darkpact;with the red 3/3 creature Tempest Efreet or with others dealing with ante's or with opponent cards,such as Bronze Tablet.

The exception I mentioned earlier would apply exactly in these cases. I'll explain better.
If a player starts the game with a given card in the deck - and is therefore the "owner" of it, according to rule 108.3 - but then one of the just introduced cards (Tempest Efreet,for example) comes to change the situation (and therefore this means that the two players are playing with the ante) then the card owner can change during the game itself.
Therefore, at this point the "owner" - and then we call him rather the "new owner" - is no longer who started playing with that card in the deck, but rather the "new owner" , since in the meantime the card has changed "owner": this means that it must be taken into account not by the "first owner", but the "new owner" instead , when the word "owner" should reappear on other cards during the same game.

Player 1 has a Tempest Efreet on the battlefield, and decides to use his ability (see the card,for details). 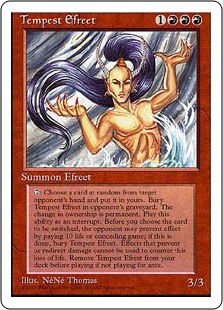 He then chooses a random card from player 2's hand, and it is a creature: for example, a Serra Angel. At this point, the “owner” of the Serra Angel is no longer player 2, but player 1.

During the game, player 1 brought Serra Angel into play; then, player 2, to improve his situation, decides to use Eldrazi Displacer's ability to exile the Serra Angel, and then put it back into play under the control of "its owner", apparently removing it from player 1.

But this is where the exception must be taken into account in its important effect.

The player who started the game with Serra Angel is in fact player 2, and therefore, taking the text of the rule 108.3 (to the letter), the Serra Angel should return to the battlefield of player 2.

However, in the meantime the “owner” of the Serra Angel has changed,due to the ability of the Tempest Efreet; therefore, whenever the word "owner" appears on the various cards, it must be understood in the sense of the "new owner", who is now precisely player 1 and not player 2,as regards to Serra Angel.

So, in this case, the use of Eldrazi Displacer's ability would bring the Serra Angel back under the control of player 1 - since this last is the “new owner” of this card - and the action taken would essentially be of little use in improving the game of player 2.

However the game ends, player 1 eventually leaves, but with one more Serra Angel in his deck, and one less Tempest Efreet, which instead goes into player 2's deck,too. This is because the "owners" of these cards have changed during the game.