How to calculate the probability to get all cards of Exodia, the Forbidden One by drawing them from my Deck during the Draw phase?

In Yu-Gi-Oh!, there are some cards that allow to the duelist to win a duel automatically.

In this case, I'm focusing my question on Exodia, The Forbidden One. To win a duel using Exodia, you must have the five cards (parts of Exodia) in your hand.

These cards are (in no particular order):

How to calculate the probability to get all cards of Exodia The Forbidden One based on: 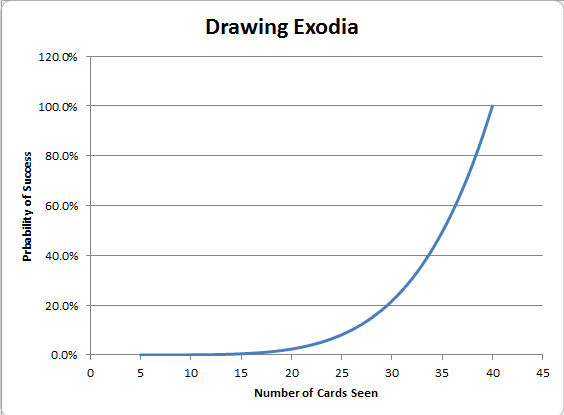 The above picture reflects the probability of drawing the full set of Exodia, dependent on the number of cards drawn overall. For example, there is a 0.000152% chance the player will draw Exodia in their opening hand, and a 87.5% chance they will draw it after seeing 39 cards out of their 40 card deck. If all 40 cards are drawn, there is a 100% chance the 5 Exodia cards will be drawn.

The Statistical Theory presented in the Question is best reflected as a Hypergeometric Distribution. Applied to this problem, the variables in questions are:

There are 5 Exodia cards (k) in a deck of 40 cards (N). If the player draws all 5 Cards (x), the player wins the game. The interest of the Question is the probability of drawing all 5 cards via only the Draw Phase. The player will see five cards in the initial hand, and an additional card per turn from the draw phase, negating any external effects. From that, over the course of the game, the player will see 5 + number of turns cards in the game (x).

By applying the Known Variables above, the player can learn the probability they will draw the complete Exodia Set, dependent on how many cards they draw overall. In this, n ranges from 5 to 40.

Since doing a tedious calculation 36 times is tiresome, computational power is a treat. The Combination formula, [aCb], is available in Microsoft Excel. Setting up a worksheet, using the equations as in this chart:

Will support the evaluation of each step in the card drawing process, providing the resultant probability: 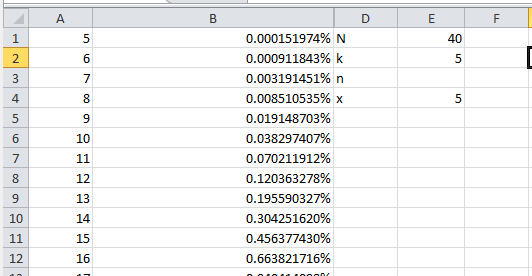 Not the answer you're looking for? Browse other questions tagged yu-gi-oh probability .

0
What are the odds of drawing five specific cards from a sixty card deck?
17
How many spins does it take to complete a game of Hi Ho! Cherry-O?
4
How do cards like Brainstorm affect the probability of drawing an out?
8
King of Tokyo: Complete Destruction
5
How do you calculate hand probabilities for 10 cards per hand (8 suits); e.g.: Cripple Mr Onion?
3
What are the probabilities of getting any or all five cards of Exodia using a specified monster card effect

4
How do cards like Brainstorm affect the probability of drawing an out?
3
What are the probabilities of getting any or all five cards of Exodia using a specified monster card effect
1
Shard of Greed - Clarification about counters and usage
40
Why is Pot of Greed banned?
3
How am I supposed to position my link monster?
5
Supreme King Gate Zero's role/s in a Dark Magician deck?
1
How do you calculate the likelihood of getting at least one combo after drawing so many cards in a deck with more than one combo?
4
What happens, when you immediately draw Exodia as Player 2?
3
Are Hand-Based Stat Monsters prone to abuse?
1
Clarification on Card Rulings on Exodia