How are new conventions established in Contract Bridge?

I was reading an article discussing the nature of cheating in Bridge, and started wondering: If all pre-arranged signals between partners are forbidden, then how do new bidding conventions come into being?

Subject to certain constraints set by the governing authority (the A.C.B.L. in North America) mostly to restrict agreements intended primarily to interfere with opponents bidding, a bridge pair is allowed to make any agreement about the meaning of calls (including bids as well as passes, doubles and redoubles) and cards played as long as they present their system (in written form) to their opponents. During the bidding and play, whoever's turn it is can ask the one opponent what the other opponent meant with a bid or a card played. During the bidding, players must alert or announce certain of their partners calls if it has an (unusual) conventional meaning.

If a certain call is used between partners as having a certain meaning, the pair can be penalised if that call is not in their system description and/or not alerted / properly explained.

Note that all information exchanged between partners MUST be conveyed using the calls and the cards played (in the proper way). The cheats as recently discovered in top Bridge are usually using a different method: coughs, a certain positioning of the bidding cards, etc...

Here is an example of the form provided in North America by the A.C.B.L. for summarizing system agreements: 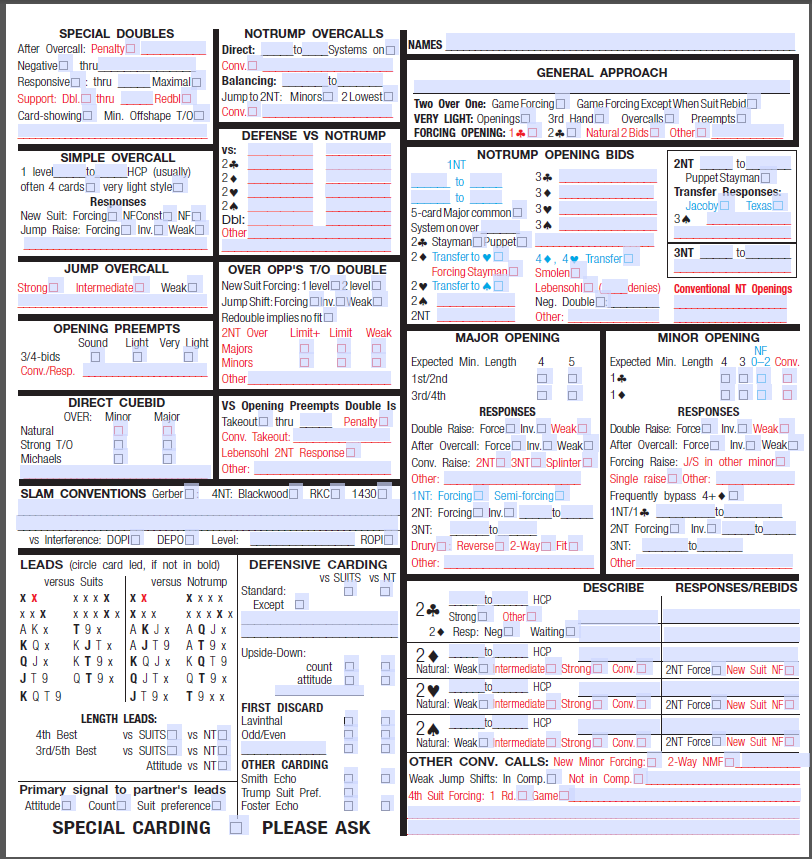 In extended team play the accompanying system notes for a long-established pair such as Eric Rodwell & Jeff Meckstroth can run to several hundred pages.

In bridge bidding "dialog," there are only 15 allowable words: The numbers one through seven, the five suits: spades, hearts, diamonds, clubs, and "no trump" (as one word), pass, double, and redouble.

These 15 words define existing conventions. A partnership is allowed to make up their own convention using these 15 words (but anything beyond that would be an illegal pre-arranged signal), as long as they disclose them in writing before the match, and "alert" their opponents at appropriate times at the table.

"New" conventions that are widely accepted by many players are established by successful players, such as Jacoby or Stayman, who have conventions named after them. But "anyone" is allowed to have their own private convention (within certain frameworks established by bridge authorities) as long as they are disclosed. Most of these never become "established" conventions.

Not the answer you're looking for? Browse other questions tagged bridge .

8
What Crazy Bridge Bidding Systems Actually Work In Practice?
14
Why is there a bonus for holding honors in bridge? Isn't having 4-5 of the highest trumps privileges enough?
18
Why are beginning to intermediate bridge players told to delay learning how to bid certain types of unusual hands?
9
How can I practice my opening leads in bridge?
5
What are some good introductory rules to bridge?
6
Running an introductory bridge lesson
3
Is there a reasonable suit preference signal on this lead?
4
Does a bid of 'Double' make you the declarer?
4
Is an emphasis on card reading/counting well placed for a learner?
6
Why are Bridge's bid meanings public?