What is the tallest Jenga tower ever created?

Under the standard rules of Jenga, what is officially recognized as the tallest Jenga tower ever created?

According the the 2008 Vintage Game Collection version of Jenga, the tallest recorded Jenga tower was made by Robert Grebler in 1985 with a tower 40 2⁄3 levels*, using an original Jenga set produced by Leslie Scott, the designer of the game.

Board Game Geek's gallery for Jenga includes a picture that nearly matches this at 40 levels tall. The user Romir posted a picture of a tower 43 levels tall, but it looks like they didn't follow the rule to complete a 3 block story before starting another one.** 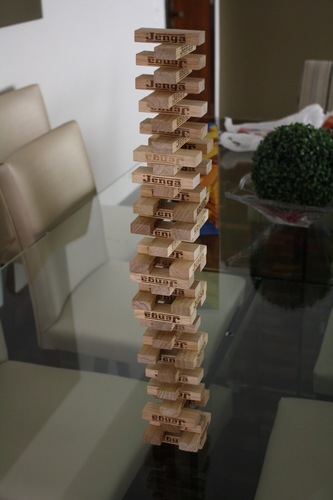 For fun, there is a YouTube video of the Tallest Game of Jenga Ever Assembled at 66 inches (5.5 feet, 1.68 meters), using multiple sets.

* Presumably, the "2/3 levels" means that the Robert Grebler placed 2 out of a possible 3 blocks on the top level before the tower collapsed. In Jenga, you must place three blocks on a level before starting a new level.

** As described above, a level must have three blocks on it before starting another level. Therefore, it's not possible for both the top level and the one below it to only have one block, as shown in the picture.

For example, in this article they write https://jenga-game.com/blog/tallest-jenga-tower/ The tallest tower is 397 centimeters (slightly higher than a single-story house); The fastest construction is 23.5 seconds from the beginning to the full tower; The largest purchase - 125 boxes with the game were bought at a time in a retail store.

5
Following the official rules of Jenga, what is the highest possible level that can be placed?
2
In Jenga, how do we define the "highest completed layer"?

9
What are the official rules of Jenga?
4
In Jenga, what happens if there are 2 blocks on the top of the tower blocking the way for the 3rd block?
21
Are all jenga blocks of exactly same size?
6
Jenga: When does a player's turn begin?
5
What is the proper way to set up a Jenga tower?
2
Is Jenga a cooperative or competitive game?
8
What is the mass (or density) of the average Jenga block?
2
In Jenga, how do we define the "highest completed layer"?
5
Following the official rules of Jenga, what is the highest possible level that can be placed?
3
What's name of of this Jenga game?