Are these “temporary defense gained by discarding cards” markers?

I just got the Race for the Galaxy: The Brink of War expansion, which I haven't played yet. It comes with some additional Takeover markers. These two markers look like "temporary defense gained by discarding cards" markers:

I can't find the card that gives this power. The rulebook states they are for Rebel Pact:

Two counters are supplied to track a player’s total possible Military on defense (for use with Rebel Pact).

But Rebel Pact is part of the Rebel vs. Imperium expansion. In Settle phase, it gives

+2 defense against a [takeover] for each... (Rebel military world) in your tableau; +1 defense for each other [military world] 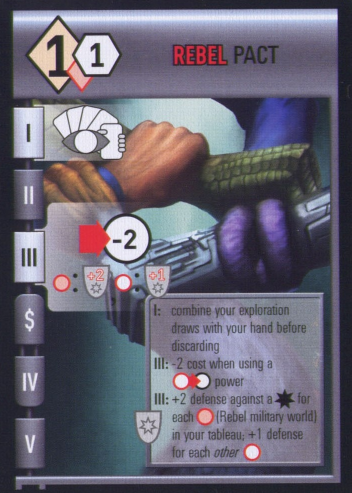 and the Rebel vs. Imperium expansion already comes with markers for tracking Rebel Pacts defense:

What card are these markers used with? What do they mean?

According to the Rulebook, next to a picture of these markers:

Two counters are supplied to track a player’s total possible Military on defense (for use with Rebel Pact).

These markers are for use on your military track to show you (and your opponents) your potential maximum defense if you count both your defensive bonus from Rebel Pact and all your sources of temporary Military (denoted by the discard symbol on the token).

Page 8 of the rulebook has an illustration.

Not the answer you're looking for? Browse other questions tagged race-for-the-galaxy or ask your own question.

7
Do Race for the Galaxy expansions allow more players without changing the base game's rules?
7
Are unused Start Worlds shuffled into the card supply?
9
When should I choose an Explore card in Race For The Galaxy?
11
In Race for the Galaxy on 6-cost development cards, does a player receive VPs for all of the categories they have satisfied, or just one?
10
When drawing cards for each produced good, does it include goods produced on windfall worlds?
1
What are some options on using the blank cards in the The Gathering Storm Expansion?
3
Are there simplified rules for Race for the Galaxy?