Is having the Mask Omen Card stolen from you have the same effect as taking it off?

Let's say an explorer is wearing the Mask Omen Card that has an effect causing you to gain two knowledge and lose two sanity when you put it on. It says when you take off the mask, the effect of the mask is reverted. But that is what happens when you manually take off the mask.

Then let's say someone steals the mask from the explorer that is wearing it during the haunt. When the item is stolen, would you agree that you lose the effect of the item?

I could be crazy but I think my logic is a slam dunk. As it is two against one I thought I would see if there is consensus one way or the other amongst gamers here. 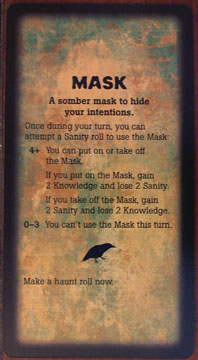 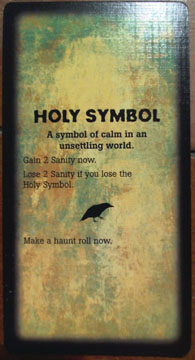 While it's true it doesn't cover the "stolen" scenario in the text on the card unlike other item omen cards like The Holy Symbol. And it's not in the Errata. There are others like me who believe that if it's removed for any reason (theft included) then it's the same as taking it off.

Not the answer you're looking for? Browse other questions tagged betrayal-at-house-on-the-hill .

2
Can you exchange items with another player, or can you only give items to another player on your turn?
6
Can the Madman cause you to die from sanity loss? If so, can the dog retrieve him?
3
Betrayal at Houseon the Hill - Can the Bell move explorers to unexplored rooms?
3
Do you have to draw an omen/event/item card as soon as you enter the room?
5
Does drawing a card end your whole turn, or just prevent further movement?
7
Betrayal at house on the hill #43 the star-sickness
4
Using an omen card, can you kill yourself?