Can I use the Shining Trapezohedron against Epic Monsters to attempt to move them?

The trapezohedron allows the investigator to discard the chosen monster on a roll of 5 or 6. Since discarding Epic Monsters is disallowed, would a 5 or 6 result in no action while a roll of 1-4 result in moving the monster to me?

The exact text on the card is: 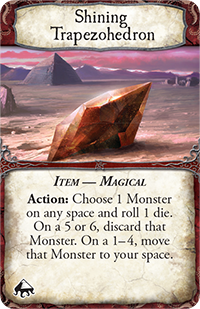 From the reference guide (page 6):

Epic Monsters are treated like Monsters for all effects except as described here:

So no, the Shining Trapezohedron can not move the Epic Monster

5
Can I use multiple items and spells in one action?
4
Can I attempt to get rid of my Cursed condition on the same reckoning phase that a Warlock inflicts me?
3
In Eldritch Horror, do epic monsters have to be encountered before non epic monsters?
3
When a monster is discarded, is it considered “defeated”?
3
How does Finn Edwards' passive ability affect the directive to discard Unique Assets?
3
When Purifying the World, can you keep or track monsters you don't usually return to the drawing pile?
1
Abhoth - where should I put defeated cultists
0
How do monsters move on local paths to side boards?
3
Can flute of the outer gods be used against epic monsters?
6
Eldritch Horror skill test for multiple combat encounters on same turn