In MTG what happens when you have multiple Aberrant Researcher in play? [duplicate] 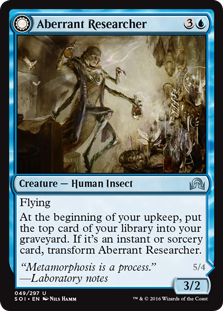 At the beginning of your upkeep, put the top card of your library into your graveyard. If it's an instant or sorcery card, transform Aberrant Researcher.

Considering I had two of these in play:

1) Would I put two into the graveyard at the start of my upkeep?

2) If an instant or sorcery is revealed do both flip at the same time?

All Aberrant Researchers trigger independently of each other. An instant or sorcery revealed by one does not flip the other.

If an object (for example, a creature) refers to itself by name in its card text, it only means itself, not other permanents with the same name.

18
How does having multiple permanents with the same name affect those permanents' abilities?
1
Activated ability that share a name