The diagram below illustrates the question. 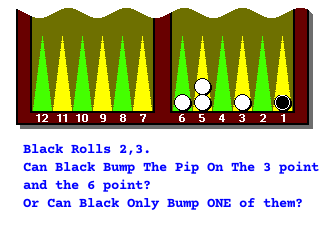 There is no rule against a single checker hitting two blots in one turn. At backgammonrules.net (emphasis mine):

If a player moves to a point occupied by only one of his opponent's checkers, the checker is hit. Hit checkers are forced to re-enter. This slows their owner down. The opponent proceeds - and a player ahead in the race home is more likely to win.

13
In backgammon, can you resign, and how can you tell when you should?
4
Different backgammon variation name
3
backgammon scenario
0
In Backgammon, when can the dice be doubled?
3
How do I Make this Backgammon-Spinoff more Level and Fair?
4
Backgammon bearing off rules
8
Backgammon best strategy for clearing my home
1
Can you play your numbers in Backgammon in a way to block one of them?
1
Backgammon board for 3 players