Can both starting roads be placed on the same settlement? 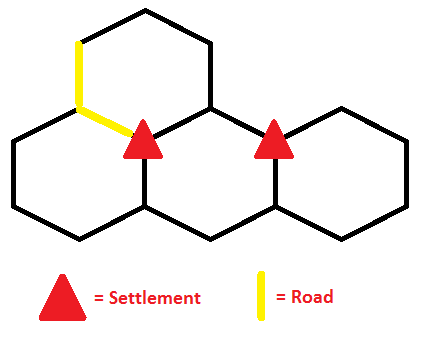 From the official game rules, under "Set-Up Phase":

The starting player places a settlement on an unoccupied intersection of their choice, then places a road adjacent to this settlement. The other players then follow clockwise. Everyone places 1 settlement and 1 adjoining road.

Once all players have built their first settlement, the player who went last in the first round begins round two. That player builds their second settlement and its adjacent road.

40
Can a settlement disrupt roads in Settlers of Catan
29
What can I do to avoid being stuck being able to do nothing in Settlers of Catan?
17
Can you collect a resource of your choice if you have no production due to the robber?
1
For a given development strategy, how do you ensure enough secondary resources?
6
Seafarers: The Fog Island -- discovering hexes with the Road Building Development Card
8
Is it possible for a person to lose "Pirate Islands" Seafarers scenario before the game even starts?
0
In Catan, when a settlement breaks a road. Do the other existing roads sit there? or are they removed?
7
Can I build several connected roads on the same turn?
1
Can I build a settlement at an intersection two roads away from one settlement and one road away from another?