How long does it take to play Arkham Horror?

BoardGameGeek says 4 hours, I've heard a lot of people say 5 hours, but some of my friends say they've played it several time in less than 2.

Right now the length of time required and the complexity level are the biggest factors affecting whether I buy this game, and I wanted to get some second opinions. :D

Well I can tell you my personal experience - I bought it because I knew lots of friends and acquaintances in my past were fairly obsessive about it, and organized an 8-player game one evening with a bunch of beginners. Four or five hours later, we were maybe halfway through the game? One or two of the group had gotten pretty into their characters and quests, but some of the others had completely given up, it was just too much. Admittedly this was a very "casual" set of players, not dedicated boardgamers, but it's a cautionary tale.

I'd say you wouldn't want to break this out except amongst people who are pretty serious about boardgames, and preferably people who have done some roleplaying - Call of Cthulhu would be ideal, obviously, but in general terms I really would class this as a roleplayer's boardgame. It definitely seems advisable to learn the rules with a smaller group than 8! I expect that games will speed up as everyone becomes familiar with the mechanics and strategies, but I'd still expect to be talking 3+ hours.

I don't see the point of breaking it up into multiple sessions really - part of the fun of the Lovecraftian universe is slogging onwards to the end of your quest despite encroaching exhaustion and madness! If you're looking for a light, fun game that you can whip out at short notice and then play for a couple of rounds before putting away again, Arkham Horror would seem to me like a really odd choice!

With a fair degree of precision, you can control the length. Of course there are always going to be outliers, but on average you can dial it in pretty good.

There are a lot of components in Arkham Horror. The better a system you have for organizing them the better. If you have things ready to go, the game can begin pretty quickly (within 10 minutes). If you show up with all the components scattered throughout the box, it could easily take 30 minutes before everything is set up. This gets much worse as you continue to add expansions.

Here is my setup: 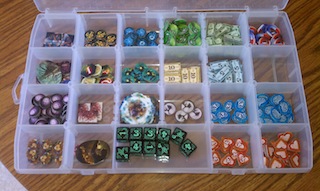 To a certain extent, adding expansions will slow down your game. In addition to having more ground to cover, there are several different mechanics that get added that have to be accounted for. Particularly with the large expansions (rifts with Kingsport, Deep Ones Rising track with Innsmouth).

We're pretty experienced with the game. With all the expansions we do 1-2 games/night in a five hour block. The average night would be one game followed by a shorter filler game (Dominion or Chez Geek).

If you have a decently prepped set without any expansion I would expect you can easily finish within 4 hours as long as at least one person is familiar with the game.

For the fastest game:

Pre-game do these steps:

When the game begins:

I've only played once (there were four of us) and it took about 4 hours. I would agree with thesunneversets that you'll likely have a much better experience if you slowly bring in new players. In this game, I was the only n00b and one of the guys had played a ton of times.

This is important because Arkham is a pretty complicated game. Combat with monsters, which happens quite a lot, requires remembering what four different symbols mean, as well as the order of rolls. If I didn't have someone there to basically tell me what I needed to roll and why, we would have spent lots of time figuring things out.

There are also lots of little details, like remembering what the color codes on the monsters mean (they may be aquatic, or flyers, or move in a certain way). All that encoded in a colored border.

So I had a lot of fun but I'd say play on setting aside a good chunk of time, especially if your group is all learning together. I also suspect that game length is a strong function of experience. I could see it moving the total time by an hour or two.

Lastly, I would recommend breaking the game up into multiple sessions. There are lots of tokens and counters and cards. You'd either have to devote a room to holding the board between games or take a picture of the board. Otherwise, there'd be no way to remember where the portals were, which ones were closed, what the players stats were at, what items everyone had, the count on the doom track, etc. It's too much to break down between games.

Arkham Horror is one of the more difficult games to predict a length on, since it can accept up to 8 players and the way in which it is played makes such a big difference. I've played with groups who approached the game as a min-max problem (basically how they approach Pandemic) and we were able to rip through a game in a couple hours, without too much trouble. I've also played in a game with 6 players that tipped over into five hour territory and was probably about halfway done. One thing that makes a huge difference is how much people are playing up to the theme. If everybody is reading their events out and listening to what is happening to each other, it's going to be a very long game indeed. If people are parallelizing actions and taking care of stuff on their own, it can move along smartly. Add in variability for expansions and I can say that I'd expect a game of AH to last anywhere from two to twelve hours, depending on expansion choices, gamers and mood.

I, too, have played multiple times and each time I got different results. One time we played for about 2 hours, while another time we played for well over 7 hours. It just depends on who you're playing the game with and how experienced they are at that game.

96 minutes, plus 18 minutes per player

More accurately, the game takes 96 min ± 8 min, plus 18 ± 2 min per player. Thus the game is expected to take the following amount of time:

It's likely that these numbers are weighted towards those who are already familiar with how to play the game, since hardcore fans are more likely to find this statistics project. If you have players who don't know the rules well (or you don't have anybody at the table who knows the rules well, the game will certainly take longer.

And again, these numbers do not include setup. If you are punching out pieces of cardboard or shuffling every deck, the game will certainly appear to take much longer.

I'm not sure how well this question can be answered for this game. There are a lot of variables: number of players, player speed, expansions used, whether the Ancient One awakens or not, etc. I've played the game a few times. One time we finished in about two hours. Another time it took 10 hours! That was a 7-player game where the Ancient One awoke (I forget which one it was, but the battle took forever!). So there is a huge amount of variability with this game.

I guess I'd say 2 and 10 hours are the extremes, but you're likely to be somewhere in the middle.

Not the answer you're looking for? Browse other questions tagged arkham-horror play-time .