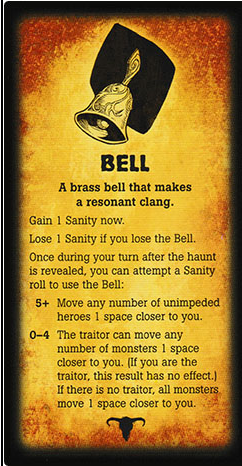 4
Can Voodoo dolls be moved?
7
Is there a movement penalty when starting in the same room as an opponent?
5
Can explorers choose not to move?
2
Can you exchange items with another player, or can you only give items to another player on your turn?
5
How does the Dog companion work and what is its benefit?
5
Is having the Mask Omen Card stolen from you have the same effect as taking it off?
3
Does this still happen in Haunt 16 even if the traitor dies?
9
What is the point of having a token for the Dog companion?
4
Does drawing a card end your whole turn, or just prevent further movement?
2
How do you resolve "nearest" when it is tied in Betrayal at House on the Hill?