Is Splendor accessible to those with red-green color-blindness?

I was recently discussing Splendor with a friend who in turn has a friend who's colorblind, and my friend was wondering whether his friend would be able to play the game. Color-coding shows up in several places; on the chips and the tops of cards the gem types also have different shapes, so someone who can't distinguish colors would still be able to tell them apart, but the prices on the cards and the nobles have consistent shapes. Thus, it comes down to whether those particular shades of red and green can be distinguished.

Board Game Geek has the following photo of game components, though it would probably be better if the question could be answered from direct experience and not from a photo (which can distort colors): 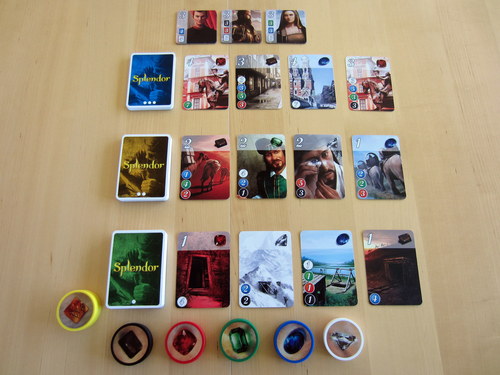 OK, I have red green colorblindness. It comes in a continuum from "severe" to "mild". I am near the midpoint (sort of halfway between mild and severe, called "partial"), so there are people worse than me. Note that while the term refers to red and green, it really isn't that red and green can't be distinguished, but is more complicated (having to do with the sensitivity of the various cells in the retina). For example I often find blue and purple the hardest to distinguish in games that use those colors, because I'm less sensitive to the red that distinguishes them. Also, if the game was designed with this type of colorblindness in mind, they might use, for example, baby blue and really dark purple, so that the saturation can be used to distinguish them. Although I might not be able to name them, I can tell them apart. I like games that have taken the care to make this additional distinction.

So, enough background, on to the actual answer. All this later discussion is based on my red green colorblindness, if it's a different kind or a different severity, some of these conclusions might be different. In fact, growing up I knew someone who was completely colorblind and only saw shades of gray. That would be completely different.

In the picture in the question, I do have a little difficulty telling some of the colors apart. However, in the larger version of that picture that you link to, I see the following colors as backgrounds to the numbers (what your comment said were important to distinguish): White, Green, Red, Black, and Blue. If there's supposed to be an additional color, that's the one I can't distinguish. When the red and the green are on the same card I can easily see which is which, but they are sort of close. The card that you point out in a comment (second row, third card) is, in fact, the hardest for me to distinguish, but I'm pretty sure it's red over black. But I got this by comparing it to a nearby card that had both, I'm not really sure how easy it would be in complete isolation.

And that brings up another point about playability that I've found important as someone partially colorblind. Does the game have the players hold cards that are "secret" or not? If there actually aren't any secret cards, I can ask other players about the colors I can't tell (which may give away some strategy info), but if there are secret cards that I have to do the color distinction on that are in my hand and not near the board, I can't do a side-by-side to tell, and I can't ask. So that makes it harder.

On the other hand, if the backs of the cards need to be distinguished, I can tell you that in that picture the two lower face down stacks look like they are supposed to be different colors, but I'm not sure and definitely couldn't tell which of the two a particular card in isolation was supposed to be.

Now, the page you pointed to has a link to an even larger version of that picture. Having clicked through to that, I can tell you that in that picture, I have no problem distinguishing any of these colors, even the card backs are clearly different in that picture.

Actually having stared at the larger photo a bit as I wrote this, I think I've actually played this game once and don't remember it as one of the "no play" games. Having thought this, I clicked through to the description page at BGG, and, sure enough, I remember it. So, unless your friend's friend is severely Red Green Colorblind, it should not be a problem. I can't really be sure about more severe cases, but that's my guess. And, again, if the nature of the colorblindness is not red green colorblindness, then none of this applies.

In this photo of the game components, you can see that differentiating gem symbols have been added to all those previously-ambiguous circles and rectangles! I assume this is a newer edition than the one you found on BGG, so just get a new copy and you should be all set.

If no-one with actual experience can help you out, try one of these as an alternative (taken from this link). Of course, you'll need a close-up picture of card (I'm sure there are some on BGG).

The gems can indeed be distinguished by their shape. The other colour coding on the cards is entirely inconsequential, except for the cost of each card

As mentioned before, most cards are public, so a colour-blind player could ask other players what gems each card requires, but they would have to ask about multiple cards each time, in order to obfuscate their intention.

Face-down cards can be drawn blind, but you could drop this rule if it creates an additional challenge. A development card can be 'reserved', i.e. picked up and held in-hand, until the player has the resources to buy and use it, in which case they would need to remember the cost of this now-concealed card.

If the colour of the cost circles was really an issue, you could mark each card with a letter or symbol, to identify the gems for each cost-number.

Not the answer you're looking for? Browse other questions tagged splendor accessibility .