How many cards can I hold? (How do conflicting effects work?)

How many cards can I hold? Normally, I'd have 7, but card text trumps rules.

On my field, I have Null Profusion and Kruphix, God of Horizons: 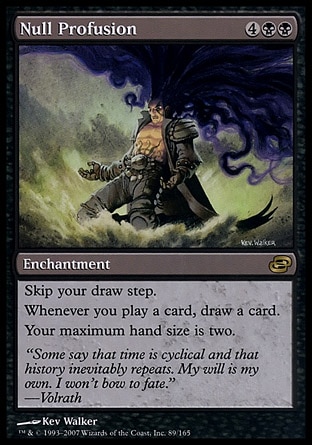 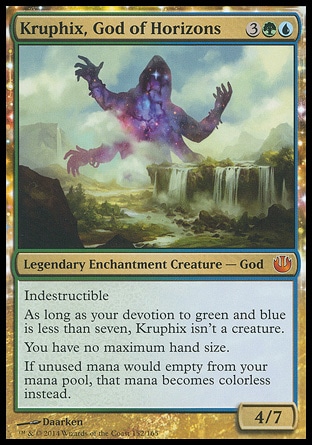 It depends, whichever one entered the battlefield last is the one that takes effect.

When a permanent enters the battlefield it receives a timestamp. Then when determining the result of continuous effects (the kind generated by both Kruphix and Null Profusion) you apply them in timestamp order.

So if the Profusion entered last you will have a max hand size of 2, and if Kruphix entered last you won't have a maximum hand size. If they were to enter the battlefield at the same time then the Active Player (the player whose turn it currently is) decides what the order of the timestamps is.

613.6c An object receives a timestamp at the time it enters a zone.

[1] Technically, there are ways to "refresh" the timestamp of a permanent, so the order they entered the battlefield is not always the same as their timestamp order, but none of those ways applies in the situation as described.

4
How do Phenomenon cards work in the Eternities Map variant?
6
Prophet of Kruphix: Can I flash Bestow?
3
How does Blood Scrivener work if I "draw 2 cards"?
7
Kruphix and Omnath, what color is the mana
6
How many Magic The Gathering cards have been printed?
4
How many cards do I need to make a collected set "draftable?"
7
How does Unstable set's "The Grand Calcutron" work with cards that interact with a player's hand?
5
How can I find all cards with flavor text from a certain set and colour?
7
How does Ixalan's Binding work against God Eternals?
10
When a card modifies how many copies of that card a deck can have, does that affect the sideboard?