What's the use of blinking a creature out (such as with Essence Flux)?

Exile target creature you control, then return that card to the battlefield under its owner's control. If it's a Spirit, put a +1/+1 counter on it.

So, say I have a 1/1 Sanctuary Cat cast onto the battlefield. According to above, I would exile it, then return it right back? Is that right? I don't see what purpose this serves unless it was a spirit. Could you clarify if I have this right and what the benefit is? 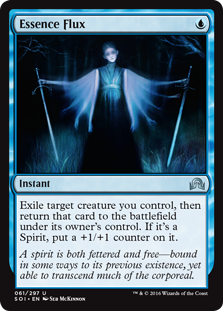 There are many uses for so-called "flicker" effects like from Essence Flux.

The namesake Flicker was the first card to exile and immediately return the target. This is where the mechanic got its unofficial name.

The creature that returns is a whole new object without any relation to its previous existence. That means that, for example:

Other blink cards such as Flicker can also target enemy creatures (though not at instant speed), which can be a very valuable play at the right time.

In short, blink effects are a powerful trick that can throw a wrench in your opponent's plans at a crucial moment. The +1/+1 counter for spirits is more of a bonus in most cases, but of course it allows you to get even more utility out of this spell.

5
What happens when you play Cloudshift on Borderland Ranger?

13
Can Thraben Heretic be used on creatures with undying?
5
How does a Loyal Cathar react to Undying Evil?
5
What is the difference between Owning and Controlling an object on the Battlefield?
4
Block creature then remove from game
2
What happen if I use cast out on my creature which is under my opponent's control and then cast out leaves the battlefield?
4
Do permanents reenter the battlefield tapped with Brago, King Eternal?
1
which has precedence when they conflict
3
Captive Audience vs. Teferi's Time Twist