What should I be trying to do strategically in Through the Ages?

I played Through the Ages for the third time last night and am struggling to come up with a decent strategy to assist in winning. I am not sure if my problem is due to the random nature of the events and tech upgrades, or if my strategy is just wrong. 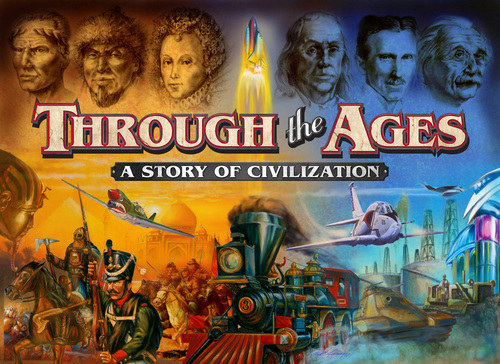 My downfall was that due to my leader allowing only one military action, I had no defense/colonisation bonus cards, so struggled to win territories, which came up a lot. The bonus on one was 11 points of culture, so effectively that could have been a 22 point swing!

I only lost by 4 culture, so no idea if my final score was the result of poor decisions/strategy, or just luck of the card draw.

I would love to hear more experienced player's views.

First, it sounds like the leader you are describing is Hammurabi, but he only applies for Age A and 1 (he will die at the end of age 1), so there's no way he should have been impeding bids for Historic Territory 2 (an Age 2 event card that by definition couldn't have come out by then). Are you sure you're playing everything right?

Also, you don't mention if you're playing the Advanced Game or the Full Game, but it's important, because there are significant differences between them in what works and what doesn't. I'll try to highlight some of the important differences. But here are some things to think about:

Note that nowhere in there did I mention culture. That's because, by and large, culture is an accident not a goal up until mid-to-late age 2. That's not true if more than one person sprints early, then you might have to invest some just to not fall too far behind, but if there's only one clear culture leader, I don't worry about it. Don't build Dramas or the Taj Mahal - those rocks are better spent on Bread & Circuses and the Universitas. Invest in infrastructure, infrastructure, infrastructure and then when you hit age 3, you'll be able to crank out a ton of culture (and slaughter them on impacts).

I think it's impossible to outline a universal winning strategy, but I'll chip in with some tips.

Hammurabi is a double edged sword. It gives you one extra CA which helps a lot in the early game. But you desperately need that second MA he took from you. With only one MA it is really hard to get a decent age I tactic card, which are Medieval army or Phalanx. The only way to get the second MA is warfare, so you need to take it as soon as it is available.

After you have the warfare it is a big help also in age II where the most powerful tactics are. After Hammurabi dies you have 3 MA and can draw full set of military cards, which increases your chance to find your precious napoleonic army or classic army. Also Mobile artillery is really good because it requires only 2 units, but it doesn't give much bonus if you manage to get Napoleon as your leader.

My general strategy is to first upgrade science then mines. There is plenty of resources available in the yellow cards but only little science. I try to collect enough science for discovering Constitutional Monarchy in early age II. Then you can pick that up even with 3 CA and discover it right away. After that your playing gets so much easier and you can choose how you are going to do your culture.

One thing to add. Strategies for two player games and four player games differ. In two player game it is essential that you manage the card row efficiently. Estimate what your opponent will take from it and calculate which cards will be in the 1 CA slot on your turn. Also in two player game taking the cards your opponent desperately needs is a must, even though you wouldn't need those card at all. For example if your opponent has not picked up irrigation form Age I, by taking Selective Breeding from Age II you will practically force your opponent to take Ocean Liner for getting any new workers. And if he misses that too, well.. You have already won. (Unless he has played suitable territories into the deck and plans to colonize them and get more yellow buttons etc. but that's more advanced)

Not the answer you're looking for? Browse other questions tagged through-the-ages .