While playing Star Wars: Imperial Assult, we had a strange situation where an Imperial had two Rebel figures down the field. One of them was clearly not within Line of Sight because one corner of the Imperial figure could not draw a line to two of the Rebel figure's corners. So the Imperial decided to target the other Rebel. 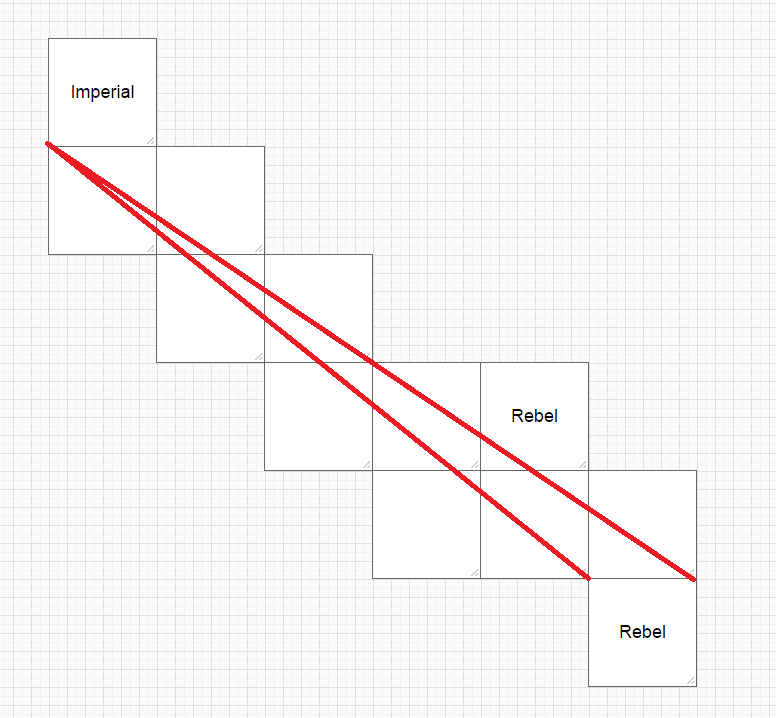 Is this a correct interpretation of the rules? Realistically, it makes no sense, since the only reason a figure would block line of sight is because it would be hit by a blaster bolt instead.

I believe that your interpretation of the rules is correct, since they do seem to be pretty clear on that point; here's the "Line of Sight" section from the Rules Reference Guide, page 16:

To determine line of sight, the player draws two imaginary, nonintersecting lines from one corner of the attacking figure’s space to two adjacent corners of the target’s space. If either of these lines passes through a wall, figure, or blocking terrain, then the figure does not have line of sight to the target.

(I've added the emphasis on "figure", the other is in the original.)

The way I'd justify this slight oddness to myself is that when you're targetting a figure, it's one particular figure that you're trying to target - there's no way to say, "this would probably hit one of these two rebels", and if there were that'd have to take into account their different distances, etc. It'd be a much more confusing combat system if that possibility were taken into account. So I guess it's a nice simplification to say that you're just targetting one figure, and anything that might get in the way blocks that intention, even if it's another hostile figure rather than blocking terrain.

Not the answer you're looking for? Browse other questions tagged star-wars-imperial-assault or ask your own question.

2
Are mission tokens considered Figures for sake of hero abilities?