Can a creature with 0 power attack?

If I have a creature with 0 power, can I still attack with it? I am asking in regards to Silent Skimmer but also in general. 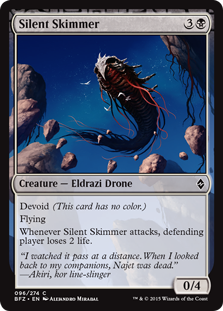 Yes, creatures with a power of 0 can attack. Otherwise, it would be very hard to use creatures like Signal Pest which buff your team when they attack, but don't have any power of their own.

The rules just say that a creature attacks. There's no stipulation based on power:

Zero power does not prevent a creature from attacking.

More generally, any creature can attack if it does not have Defender, has been under your control since the beginning of your turn (see Summoning Sickness) or else has Haste, and no other effect specifically restricts it from attacking. The effect will usually be obvious, like an enchantment that reads "Creatures with power {X} or less can't attack." Reverence is a pretty good example of this.

508.1c The active player checks each creature he or she controls to see whether it’s affected by any restrictions (effects that say a creature can’t attack, or that it can’t attack unless some condition is met). If any restrictions are being disobeyed, the declaration of attackers is illegal.

9
Auras on creatures with protection
2
Can a tapped creature attack or block?
6
Interaction with "with power 2 or less"
7
If Rhonas's power is less than 4 but you control a creature with power 4 or greater, can he attack or block?
9
Why does Bonded Horncrest have to attack with another creature?
9
What is Devoid and what is special about it?
8
Does Master of Cruelties survive being blocked by a creature with 4 or more power?