This was a 4 player game ( I think tops ). Each player had their homeworld in their own galaxy separated in different sections on the board. You could attach boosters and rockets on your ships to make them more powerful. There were scouter ships and big battle ships because each ship could hold many cannons or no cannons at all in some cases. One of the ways to win was to destroy everybody but there was 1 more way to win that I cannot remember, I think it was to boost to the middle of the board.

There was also crystals on planets in your galaxy and each planet was connected with a blueish line between them you could travel. Playing certain cards would create additional paths that were permanent. You could also set up defending turrets on bases you've explored and captured. I remember you could require resources from worlds and things would end up in your scrapyard which was your own player board.

I believe there was battle with NPCs to capture small planets in a territory and all battles were a combination of dice rolling and card play.

The main board came in a few pieces but it was in a circularish with a center piece that may have been empty / space in the center. I'm not sure when this came out or what the title could have been. The board was a very unique piece of it I think.

I'm fairly certain it was not Star Wars, Star Trek, or Battlestar Galactica.

Is it possible that you mean Exodus Proxima Centauri? https://boardgamegeek.com/boardgame/122842/exodus-proxima-centauri

I never played this game but I once saw it at a fair.

My memory was a tad off but the game has been identified as: 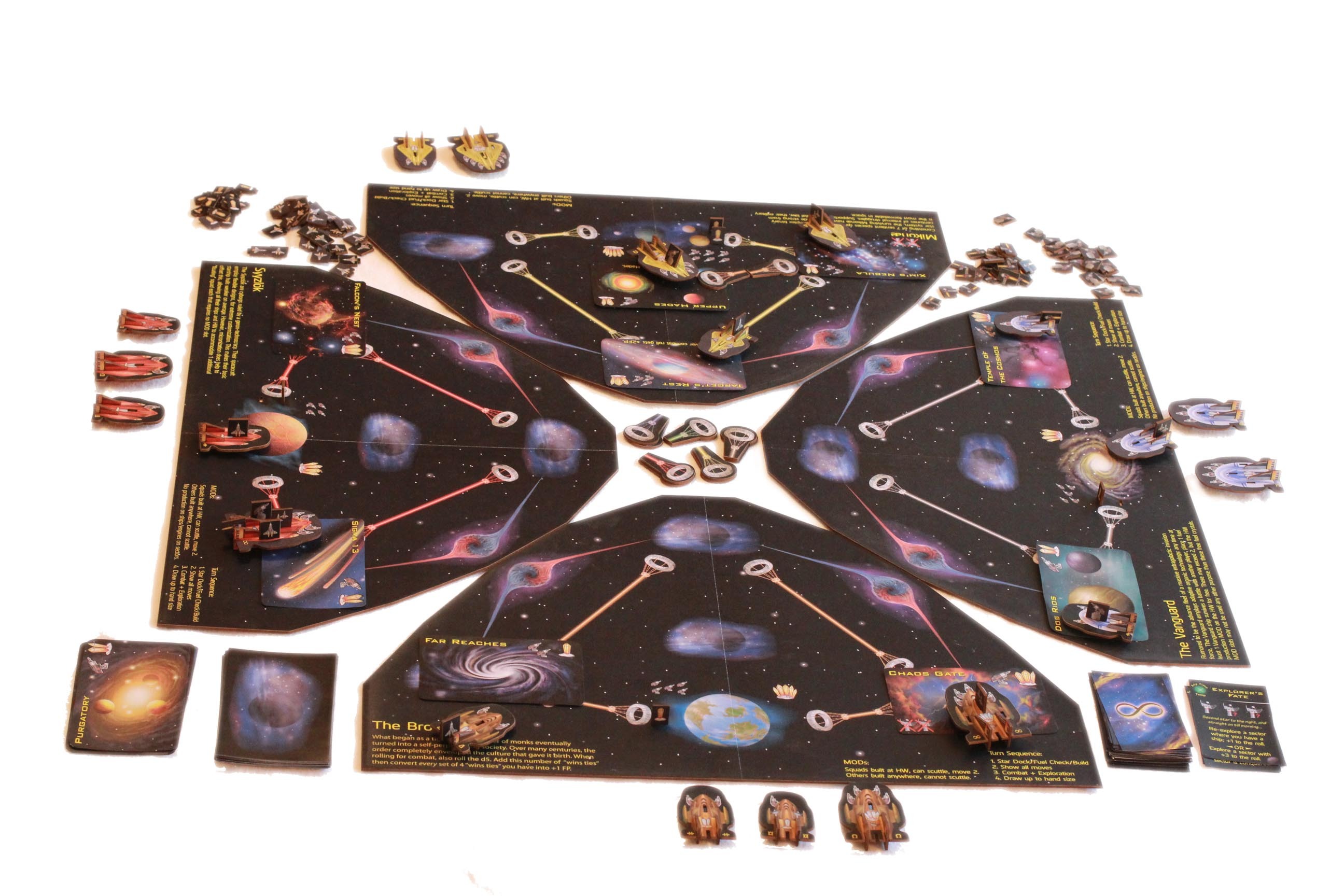 I think you are talking about "Eclipse" : https://boardgamegeek.com/boardgame/72125/eclipse

It got some elements you described: You can win by destroying the others or after X rounds with victory points. War, diplomacy... with other players. Conquer some planets to boost your industry, research, credits... And the "ancients", an old race "NPC" to destroy to obtain powerful artefacts. It can be played with 4 players. You can attach weapons, shields to your ships.

But crystals on planets, blueish line to travel and "playing cards" doesn't match.

15
Soviet space exploration board game (now with pictures)
8
Genre-mash up battle game
9
15 years old card game with ancient battles theme and complex mechanics
14
Does anyone recognize this monster family board game?
5
Space version of a monopoly like game?
3
Game with a shopper on a bridge
14
Identify this space combat game with a letter based ship architecture
4
Simplistic Area Control Board Game with Discs
1
What was the game with a plastic Bigfoot that left footprint counters?
6
Late 80's game, post apocalyptic dinosaurs and guns