How does Decommission (and Revolt) work with multiple permanents leaving the battlefield?

A new Aether Revolt card, "Decommission", states: "If a permanent you controlled left the battlefield this turn, you gain 3 life". 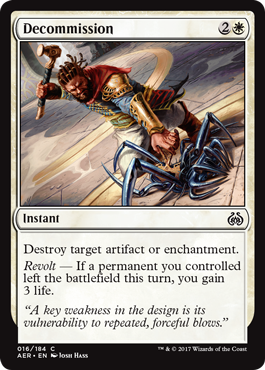 I suspect that would mean if you sacrificed 3 artifact tokens, then played decommission later on you would gain 9 life.

My confusion is that I would expect to see "for each permanent that left the battlefield this turn" to give the total of 9 life. As it is written, I am thinking just 3, but is "each" implied? Pretty basic question I guess. Thanks in advance.

You gain exactly 3 life no matter how many of your permanents left the battlefield this turn (as long as it's at least one).

Your confusion as you describe it comes down to: "I expect this wording means {thing}. But if it really meant {thing} I'd expect it to use this other wording instead." Confusion like that is often a warning flag you've misread the card, and ought to check it again. MTG cards mean exactly what they say — if it meant "for each permanent" it'd say so.

Morbid — At the beginning of each end step, if a creature died this turn, you may draw a card.

if you look at the gatherer text for this card it says:

You draw one card when the ability resolves, not one card per creature that died during the turn.

If you would draw a card for each creature that died it would say it like this:

You draw a card for each creature that died this turn

There is an ability like this on armorcraft judge:

When Armorcraft Judge enters the battlefield, draw a card for each creature you control with a +1/+1 counter on it.

Note that it specificly states each

6
Goldnight Redeemer and Angel's Tomb
2
How can Glacial Chasm be useful?
7
Control Effects - Interaction between Molten Primordial and Willbreaker
26
Why can't Haphazard Bombardment randomly select a permanent with Indestructible?
16
What if Magic gives the second player a Lotus Petal, similar to what Hearthstone does?
7
Trostani Discordant vs. In Bolas's Clutches
2
Can I survive every enchantment, creature, and artifact in the game entering the battlefield at the same time?
7
What happens to a permanent I gained control over using Agent of Treachery, and I leave a multiplayer game?
6
Can this sequence of events cause a commander to be permanently phased out?
7
How does Octopus Umbra interact with effects that change the base power and toughness of, and counters on, a creature?