Does Femme Fatale target exactly 1 ice, or all with same name?

It's just the one. When a card in Android: Netrunner is referring to multiple cards of the same name, it'll refer to them as copies, e.g. Copycat. There are also other examples. 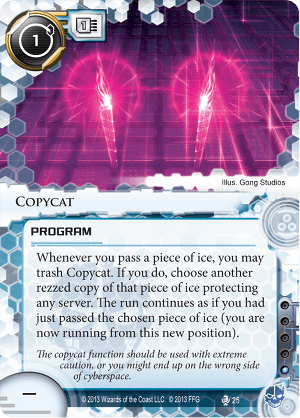 Femme Fatale targets a specific piece of ice, not ice by name, it can even target ice you don't know the name of (unrezzed) in which case how would it let you get past other copies of the same ice. If Femme allowed you to bypass all ice of the same type it would only be able to target rezzed ice (so you could know what ice you are allowed to bypass, and refer to bypassing that ice and all copies of that ice, or would allow you to name a piece of ice, allowing you to bypass all ice with that name.

Not the answer you're looking for? Browse other questions tagged android-netrunner .

3
Can I start with my identity card unrezzed?
5
Hokusai and Bernice Mai timing
3
Why is Femme Fatale so expensive to install?
2
How do "Run" Events interact with effects that change the server you're running on?
11
What are some common tactics to make runs against servers with unrezzed ICE in Netrunner?
10
Does destroying a server mean the run is unsuccessful?
3
Can Nisei MK II Be Used During an Ice Encounter?
6
How exactly does 'Inside Job' work?
4
Trashing two birds with one stone
2
Breaking ICE - exactly how should strength be treated?