The Digglet from XY - Evolutions protects itself as long as it's on the bench. How is it possible to defeat the active Diglett if there's also a second one on the bench, causing each to protect itself? 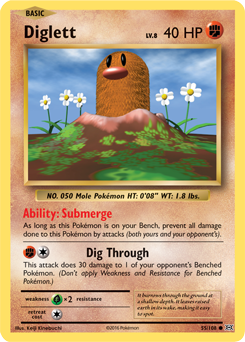 Diglett card from XY - Evolutions expansion has an interesting ability:

Ability: Submerge
As long as this Pokémon is on your Bench, prevent all damage done to this Pokémon by attacks (both yours and your opponent's).

The phrase this Pokémon is special in Pokémon TCG - it refers to this one and only particular Pokémon, not any other, not even other Pokémon of the same species.

Thus it's quite simple to defeat two Digletts, because the active one can be damaged without problems. Just knock out the first one during one turn, then the second one during later turn. 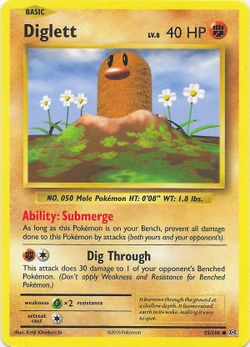 5
What to do when you "return a Pokemon to your hand"
1
Why don't ground-types (fighting) in Pokemon TCG have resistance to electric?
4
How does the whole EX/GX thing work? (Pokemon TCG)
0
Pokémon attacks which deal no damage
2
When you return an evolved pokemon to your hand, and you put it back into play, do you have to evolve the pokemon again?
5
How do you identify what series a Pokemon card is from?
1
Do I take two prize cards when a Pokemon-EX is discarded?