Devoured while lost in time and space

2) If 1), would I2 actually be devoured? The text says that an investigator lost in time and space cannot be affected by anything.

b) given the general theme and the unspoken rule that "if there are various interpretations of a rule in a cooperative game, choose the least helpful", it feels like a loophole that breaks the rules. Therefore, we chose another investigator to be devoured

I think that you are right because of the unspoken rule of cooperative games. I could not find anything in the erratas apart from a reference to "move". 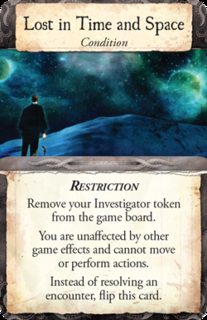 You are unaffected by other game effects […]

This does imply that the investigator cannot have any effects at all. So they cannot be a target for anything at all: spells, Dark Pacts, etc…

This is again implied by the errata, although it refers to "moves" and not other specific effects.

Q. Can an investigator with a Lost in Time and Space Condition be moved by another investigator using the Plumb the Void Spell?

If I'm an ancient one, and let you choose another investigator to be devoured, and you try to get clever on me and choose an investigator who is inaccessible, I would just devour you out of spite. So I think that's just how this should work. Nice try, but no loopholes and wishful thinking.

2
Delayed and detained
2
Taking, searching, and managing card decks
2
In Eldritch Horror, how much complexity and extra playing time do expansions add?
5
What to do with "Antarctic Guide" and "Dog Sled" while playing against an Ancient One from the base game?
2
If I am Lost in Time and Space during a reckoning effect resolution, do I continue to resolve remaining reckoning effects?
0
Does Yig's awakened reckoning effect spawn a cultist on each space fulfilling the requirement, or just 1 on a space of your choice?
3
Should reckoning effects be executed as if done simultaneously?
7
Spells and Items during combat
3
When I acquire assets, can I receive the item into my possession one at a time?
2
Can Jenny Barnes' enable someone to use acquire assets a second time?