I'm not sure how much go is discussed on StackExchange, but currently I prefer trying it here than an actual go forum. This question concerns two topics:

Recently the free go AI Leela has been released, which is thought to be fairly strong (up to 9d KGS with proper hardware). I appear to have tricked it with a fairly simple position though, which puzzles me deeply. The starting position is: 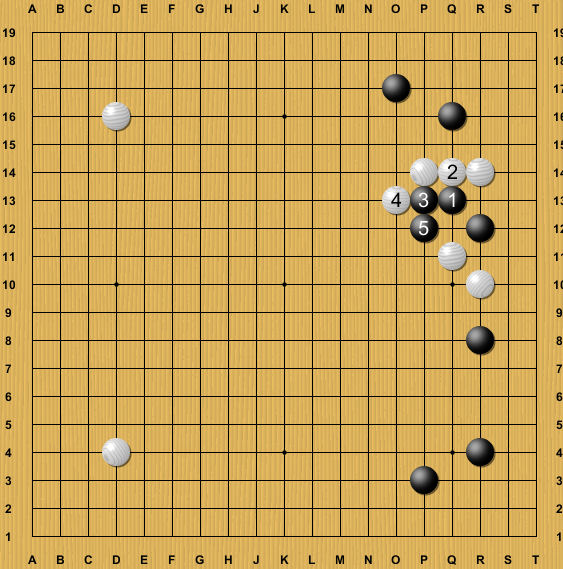 This is a fairly common situation resulting from the orthodox fuseki. My concern is with black resisting this in a vulgar way: Black plays 1. bQ13 2. Q14 3. P13 4. O13 5. P12. The first question now is: How does white punish this overplay? I think there is a way to net black, which I've seen before somewhere but I can't remember nor find it. I was hoping the engine would do this for me but that was quite wrong:

The AI Leela (version 0.9.0 on fairly crappy hardware) gives this as a >60% winning percentage for white and suggests the continuation 6. R13 7. Q12 8. S12 wheruppon it suggests for black to let white connect under. However in case black plays 10. S11 its suggestion (with still some 60% white win) is to cut and "loose ladder", resulting in the following position ("1" in the second diagramm = move 6): 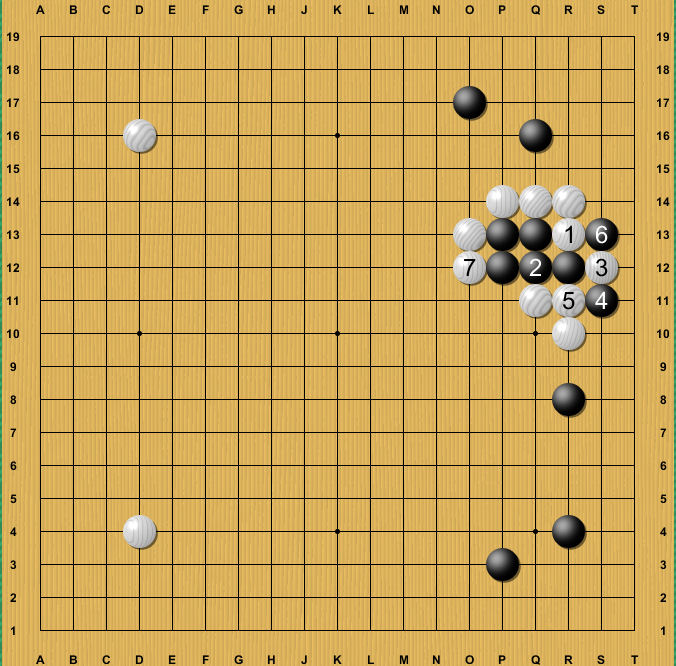 Black now pushes at P11 (= move 1 in diagramm 3) and white blocks. Leela says that white has a big advantage, but only considers black capturing T12. If black pushes out, the engine tries to "ladder" the group, each time suggesting black to take the S12 stone, and white's winning percentage dropping rapidly every time black (instead of taking S12) just keeps pushing out the futile "ladder" attempt by white. I conclude that the engine doesnt't consider the "pushing out" move by black and incorrectly asseses the entire variation (which is somewhat surprising). 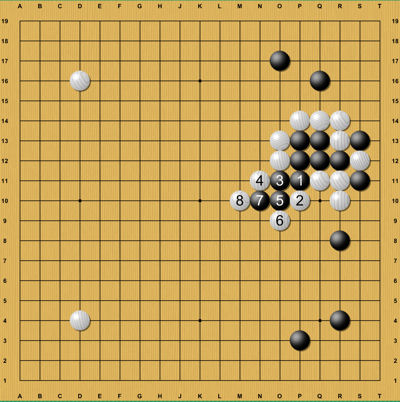 What are your thoughts on this, especially as to correct play in the various positions? (In particular after diagramm 1 move 5)? I suspect O12 is a big mistake but can't be sure (my rank is 1k on KGS).

W1 should be N11, then black dies, I'd claim from memory.

W1 at R13 is probably not a complete disaster in itself, but O12 should then be O11, or maybe P10 should be O10. That would force black to capture and white would at least build some influence -- not thickness, as she can't protect all cuts.

Even before that, white should probably descend at T13 and later throw in to induce the infamous "hammer" shape, which would probably give white one or two additional sente moves.

That Leela is not seeing your sequence does seem like a clear case of a bug to me. Maybe Leela figured something like "black is losing the ladder, so black must capture. And because playing out ladders that do not work is bad, black will capture there immediately!" (pure speculation on my part).

Not the answer you're looking for? Browse other questions tagged go computer-ai joseki-deviation leela openings or ask your own question.

10
Game from 1978: Why does this fuseki position favor black?
5
4-4 high approach - why is the defensive approach prefered?
12
Why is this tsumego solution wrong?
4
Using the edges of the board in Go
12
What is “looking for a place to resign” in go?
5
How do I effectively use a big wall?
5
Go: How is a “suicidal” move that captures enemy stones handled?
3
What joseki, if any, yields this position on page 60 of 38 Basic Joseki?
4
What is this alternate cut after 3-3 against double keima round hoshi?