How do you score a word that has multiple bonuses?

How do you score a word that begins on a triple word space, ends on a double word space and uses all seven of your tiles?

Note that this is something that is impossible to pull off in a standard game as the only row/column that has both a triple word and a double word is the one with the starting space and you need 8 tiles to get from the double word space to the triple word space.

According to the Scrabble rules you would take the value of the word and multiply by by 6, and then add 50 points. (The rules don't explicitly state this due to it being impossible, but they do account for 2 doubles or 2 triples so there is no reason to think that a triple and a double would work differently)

It depends on which letters were already on the board, and which ones you added.

When you place a word in Scrabble, it must attach to existing words (except for the very first play of the game). When you add to an existing word, you score any letters that were already on the board again, but you do not score any triple or double word or letter points for the spaces underneath already-existing letters; only for spaces that you just covered up for the first time.

If you mean a situation where your own letters were used to cover up both the triple and double word spaces, then this is impossible. The only places on the board where a double and triple word score exist on the same row or column use the center space; and if you were going there as your first move, you cannot reach a triple word score with only 7 letters.

Either way, you would add 50 points to the normal word score for having used all 7 of your letters.

Ignoring the board configuration, scoring works in the following way:

Let's have an example. Look at the following situation. The board looks like this: 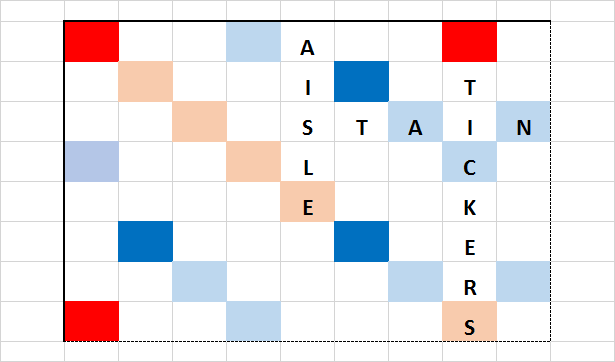 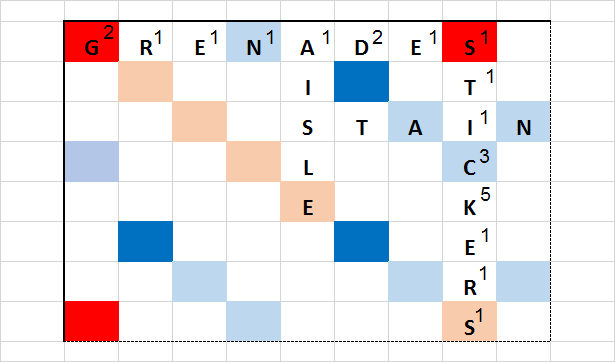 You'd score two words: "grenades" and "stickers". You didn't modify "aisle", so you don't score it.

Let's do "stickers" first. Ignore the double letter and double word spaces, since they've already been used up. Only tiles placed this turn activate bonus spaces.

Now "grenades". All of the bonus tiles are new, so we apply them.

If you were playing on a board that made it possible to apply double and triple word bonuses to the same play, you just multiply the word for each one. The order doesn't matter; it'll be x3 and x2, so x6 either way around.