If I can't "win the game" in multiplayer, do my opponents still lose?

Let's say I'm playing a multiplayer game, and I'm drawing from an empty deck with Laboratory Maniac out while an opponent has Platinum Angel.

Is 104.3h a replacement effect created by the game rules, or does it modify the effect "win the game" on the card?

A different angle: Platinum Angel says "your opponents can't win the game". Does this refer to the game action "win the game", which instead causes your opponents to lose, or to actually winning the game? (or both?)

If 104.3h is a replacement effect, and "can't win" precludes following the "win the game" instruction, then nothing would happen. The event for 104.3h to replace didn't occur. I think this is the more likely outcome.

Otherwise, if we can follow the Maniac's instruction, then each opponent loses the game, except Platinum Angel's controller, because they can't.

Paraphrased from a comment for clarity: This question might boil down to "can game rules be replacement effects?" I haven't seen why not. The question I have regarding PA's effect is does it stop just the game event of "you win", or does it stop everything that, due to language, looks like "you win"? i.e. if 104.3h changes the game to mean the game action "you win" has nothing to do with winning, it might slip through, but if 104.3h is a replacement effect then it never sees LM's ability to replace it.

No player will lose the game, and the game continues normally

104.3h In a multiplayer game, an effect that states that a player wins the game instead causes all of that player’s opponents to lose the game. (...)

Now, if one of those players controls a Platinum Angel which has a continuous effect stating that they can't lose the game and opponents can't win the game, it will prevent any opponent of that player from winning the game.

101.2. When a rule or effect allows or directs something to happen, and another effect states that it can’t happen, the “can’t” effect takes precedence.

Platinum Angel will effectively prevent Laboratory Maniac's ability from going through with the event of winning the game, meaning the rule 104.3h never applies to this situation.

This course of events is backed by Matt Tabak's response to a question asked by Samthere:

This is actually independent from whether rule 104.3h is actually a replacement effect or not, and whether this has been discussed at large in answers, comments and in chat to the point where everyone seems to be agreing to disagree.
Until further enlightenment in this regard, let's cover both cases, and why they're largely identical...

I actually contacted WotC support, and they confirmed this is what happens. I haven't figured out a way to publicize this support question, so here's a screenshot of the interaction: 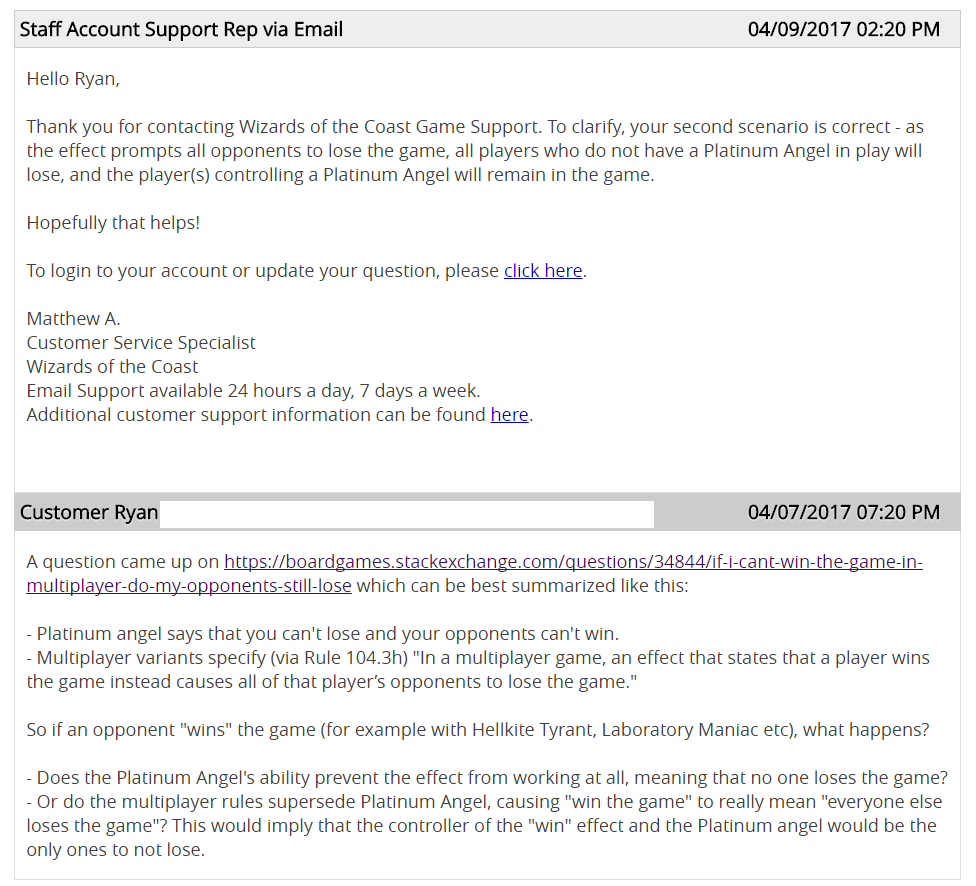 Everyone loses except for you and the player who controls Platinum Angel.

Yes. Even though they are not replacement effects, rules can modify all aspects of the game. In a multiplayer game, 104.3h says that any effect that causes you to win the game instead does something totally different.

Despite this, rule 104.3h is not a replacement effect. It's still just a rule.

In a multiplayer game, if I would draw on an empty library while I control Laboratory Maniac and one opponent controls Platinum Angel, what happens?

Here is how this would go down:

There are infinitely many things you can't do, and yet there are not infinitely many rules. How could this be? The answer is simple: you are not allowed to do stuff unless the rules specifically allow you to.

In contrast to ryanyuyu's response from WotC support, I asked Matt Tabak (the official MTG rules manager) and he had the following to say.

From this we can see that Platinum Angel does see the attempt to "win the game" and stops it before it happens. This means that 104.3h alters the way you follow the "win the game" instruction, but doesn't change the instruction itself. This lines up with TheThirdMan's interpretation.

For clarity, the case with Platinum Angel works because of the "your opponents can't win the game". Every "you can't lose" effect currently in Magic also includes that clause. If there was a standalone "you can't lose" effect, the other players would lose. Additionally, if the Platinum Angel player instead controlled an Abyssal Persecutor, only that player would lose in that instance.

As TheThirdMan mentioned, it doesn't matter whether 104.3h is a replacement effect (although based on the course of the discussion I believe it isn't).

As a note, I'd like to mention that this seems to be an issue that has confounded many of us — novices, judges and WotC support alike — and numerous others in the past. I think both of the main interpretations are reasonable and well represented in other answers here.

I would say that everyone but you and the Platinum Angel owner would lose and gameplay would continue with you two (if you so choose).

By the wording of winning effect in multiplayer, it certainly sounds like a replacement effect.

And since replacement and prevention effects are applied at the same time, you can pick which one you want to apply first.

616.1 If two or more replacement and/or prevention effects are attempting to modify the way an event affects an object or player, the affected object’s controller (or its owner if it has no controller) or the affected player chooses one to apply, following the steps listed below. If two or more players have to make these choices at the same time, choices are made in APNAP order

So if you wanted to keep the other players around (Platinum Angel controller is way ahead), you could have the prevention effect apply first. Or just make the world burn (everyone else lose).

28
Are there any ways to lose in a "You can't lose the game" game?
7
Laboratory maniac and not being able to win the game

9
How do Platinum Angel and Darksteel Reactor interact?
7
Laboratory maniac and not being able to win the game
17
Can I win in 1v1 if I stole someone else's platinum angel, would lose without it, then defeat them?
17
Can one draw their commander to the command zone, and would that be a draw?
13
If Progenitus "dies" to the command zone, can I shuffle my deck?
9
What happens if I lose a match due to time in a single-elimination game, but I have a Platinum Angel on the battlefield?
5
Why does negative life and Platinum Angel not cause a draw?
5
What happens if I take damage with Worship out while at negative life?
9
What specifically makes Alms Collector apply before other replacement effects?