In Above and Below, the area next to the starting space and the 1-reputation space on the reputation track have a 2/3 and a 5 vp symbol next to them: 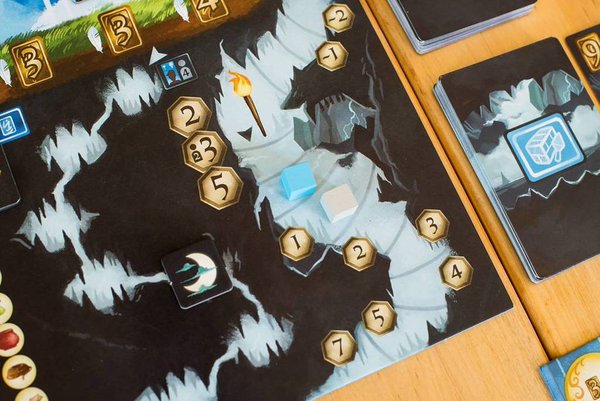 As far as I could find, there doesn't seem to be anything in the rules in favor of either case, nor could I find anything online to help. Does anyone know if there's a ruling on this somewhere?

There are no reputation points at these positions.

The 2/3/5 is a reminder for the rank-based scoring of reputation. The smaller numbers are for position-based scoring. There are no bonuses or penalties for being within -1 and +2 reputation.

From the rules (emphasis mine):

Players also gain or lose village points indicated by a smaller village point symbol next to their position on the track. For example, if a player ended the game with his cube on the highest space on the track, near the surface, he would lose 2 village points.

Not the answer you're looking for? Browse other questions tagged scoring above-and-below or ask your own question.

5
In contract bridge, what are bonus points for?
10
What rules were used wrong in Tabletop's episode for “Fortune and Glory”?
6
Is anyone aware of any score keeping apps (BB10 or Android) that can keep track of score (including extra meta-data)?
1
How is a Gin Rummy hand scored if both the knocking and defending player have Gin?
3
How would this seki be scored at the end of the game?
4
In Gin-Rummy, what is the bonus points for Gin and Undercut?
2
What is scored for bidding and making 3 Clubs Doubled?
4
Is there a long-term scoring system for 4 or 5 players who have played the same game repeatedly?
0
Is there a canonical way of placing the scoring meeple to signify having gone round the scoring track?
3
Does the Cosumi Go site sometimes get the score wrong?