What's the difference between a Euchre, a March and a Set?

I've heard of different terms for the same result in Euchre, but is it just preference or is there more to it?

This is the earliest reference I could find to Euchre, in Hoyle's 1845 edition.

This excerpt is from The Law and Practice of the Game of Euchre by Charles Henry Wharton Meehan. Written in 1862, per Wikipedia, it is believed to be the oldest book dedicated to Euchre. 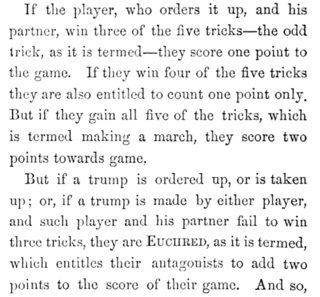 Hoyle's 2001 edition uses the same terms, as does Scarne's Encyclopedia of Card Games. Card Games for Dummies does as well, however they use the terms "Marches or Sweeps" for getting all five tricks.

While I've heard the other two terms, it does not seem that they have entered common enough usage to be documented into any formal listing of rules.

This is how I've understood it:

Not the answer you're looking for? Browse other questions tagged euchre or ask your own question.

9
What's the proper etiquette when a Euchre trick is earned?
11
What are the odds of getting the following hands in euchre?
2
What is the probability of obtaining the right, left, Ace, King, and Queen of trump in a 5-card hand in euchre?
1
What is the probability that a player is dealt 3 kings in a single euchre hand?
2
Does the result of the last game of Euchre determine who gets to deal first in the next game?
5
What happens if someone reneges on a loner hand in euchre?
1
Euchre - Calling a a renege after the hand is closed before the next deal?
1
In Euchre, Can a person of the opposing team go alone if trump was ordered up by the other team?