How does Conestoga work?

In BANG! Dodge City the Conestoga card has some ambiguous symbols. 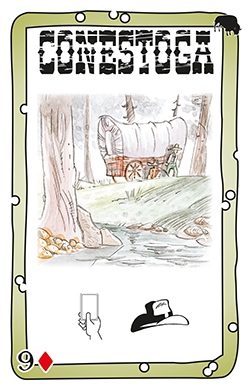 The first symbol is draw a card, and the second refers to any player at the table. This seems to have two possible meanings:

The first interpretation seems quite powerful (maybe too powerful), and the second seems pretty useless (unless you're a really generous Deputy).

There's an official answer in the Bang! Dodge City FAQ:

A. Just read the symbols. They both allow you to draw a card (from the hand of among “in play” cards) from any one player, regardless of the distance.

Adding this to the base rules of Bang! regarding the "draw!" symbol:

Draw a card. If “any player” is specified (see that symbol), then you can draw a random card from his hand, or you can choose one in play in front of him. If no player is specified, draw the top card of the deck. In any case, cards drawn are added to your hand.

EDIT: making an assumption about a potential typo in the Dodge City FAQ.

The wording from the FAQ is a bit iffy, so it might be possible the intended interpretation is "from the hand or among 'in play cards'". If this is, in fact the case, Conestoga can be read as:

Take a card from any opponent at random, or take one at your discretion from the "in play" cards in front of any opponent.

Both cards work exactly like a panic works with the difference being that they can be used against players of any range.

Unless there is a rule change in a different rule book that changes the way the draw a card symbol works it will be the same in the base game as it is in the expansions.

One thing that should be remembered is that these rules where all written in Italian and there are many issues with translations that lead to confusion in the rules. Not to mention there are many rules that are not fully clarified for new abilities in future expansions and how they interact with existing ones.

If you look at a panic card you will notice it has two symbols on it.

Draw a card. If “any player” is specified (see that symbol), then you can draw a random card from his hand, or you can choose one in play in front of him. If no player is specified, draw the top card of the deck. In any case, c

It specifies that the effect applies to any one player at a distance of the number or less. Note: Mustang and Scope can alter this distance, but weapons in play do not

The symbols state: “Draw a card” from “a player at distance 1”. Remember that this distance is not modified by weapons, but only by cards such as Mustang and/or Scope.

It specifies that you can apply the effect to any chosen player, regardless of the distance.

Not the answer you're looking for? Browse other questions tagged bang or ask your own question.

13
Does Jourdonnais's ability negate all or half of Slab the Killer's attack on a successful draw?
2
How can we make Don Bell more balanced?
6
How do Rum and Lucky Duke/Horse Shoes interact?
3
How do Lasso, The Judge and Belle Star interact with equipment cards?
7
How is the panic card affected by Range?
1
Does John Pain get cards drawn at the beginning of a player's turn or from Stage Coach and Wells Fargo?
3
Bang How to Use Ghost Cards
2
How long do you keep the rattlesnake card in Bang!
3
Henry Block and self Cat Balou in Bang
0
How does a duel work in the game BANG?