Where do you go for the 'nearest railroad' in Monopoly?

In the American edition of Monopoly, there is a Chance card that says:

Pay owner twice the rental to which he/she is entitled. If railroad is unowned, you may buy it from the bank. 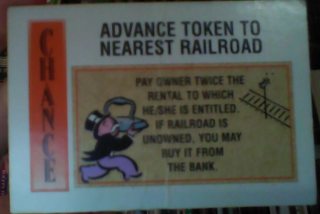 Look closely at the card and it tells you exactly what to do.

Pay owner twice the rental to which he/she is entitled. If railroad is unowned, you may buy it from the bank.

Advance means you are moving forward on the board so this will always move you to the railroad that you run into. In your example it means that you would stop at Pennsylvania.

From what it sounds like you are reading way to much into a simple card. In the game of Monopoly, there is no way to go backwards, so you never look behind you when you are trying to calculate distance.

To break it down from the Chance spot that is in the light blues, the ranking of railroads in terms of distance is

The only time you can pass go with that card is on the Chance spot right after the Short Line spot on the board.

Always need to remember that when playing a board game (unless specifically stated) you calculate distance based on the direction you move.

As for the comment about the Go to Jail card, it does not instruct you to advance to jail. That card is specifying changes to the movement rules on the card because it wants you to treat it differently than other cards that direct you to move to a location.

There are other cards which break the movement rules and those cards fully describe the changes to the rules.

This card clearly describes a movement that is outside of the normal rules and does not use the word advance so it can't be confused with normal movement.

GO Each time a player’s token lands on or passes over GO, whether by throw of the dice or by drawing a card, the Banker pays the player a $200 salary. The $200 is paid only once each time around the board. However, if a player passing GO on the throw of a dice lands 2 spaces beyond it on Community Chest, or 7 spaces beyond it on Chance, and draws the “Advance to GO” card, he/she collects $200 for passing GO the first time and another $200 for reaching it the second time by instructions on the card.

The wording is ambiguous, but in the many years that I've played this game, I have never heard it interpreted as "Find the closest railroad in front of or behind you, and advance until you arrive there".

While I know of no official ruling that spells this out (which is, in itself, somewhat telling, since most people seem to assume that "nearest" only applies to spaces in front of you, and this consensus was apparently clear enough that the makers never felt the need to clarify), there have been a number of official Monopoly video games released over the years. I certainly haven't played them all, but I've played 3 or 4 different versions, and never once has any of them advanced me around the board, past "Go", to reach a railroad station behind me when drawing this card.

As these were officially licensed versions of the game, I believe that is a fairly clear indication that the rules for this card are intended to only apply to railroads in front of you.

According to Hasbro, publishers of Monopoly, you move forward to the next railroad.

Here is the answer I received from Hasbro's Global Customer Care Representative : 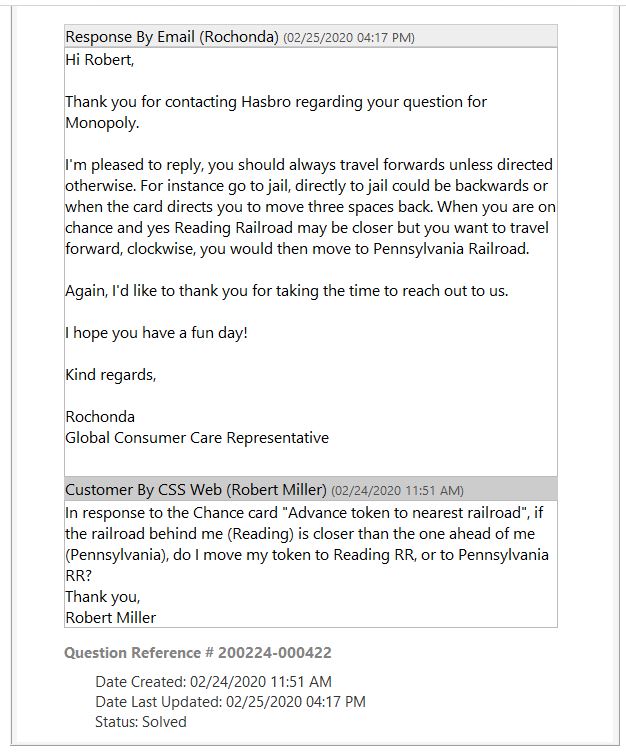 Many people make this mistake because of advance

3
Do you move forwards or backwards on the King's Cross Chance card?

9
Monopoly - Community chest paying for houses
23
Do you still pay 10x the dice when getting the chance card that takes you to the nearest utility if the property is mortgaged?
4
in monopoly do you collect 200 if you get sent to the nearest trainstation or fleet street but the card doesn't state collect or do not collect on it
40
Do you collect $200 in Monopoly if you don't ask for it?
7
In Monopoly, how do people determine who is the owner of a property?
7
Can you owe a player in monopoly
5
Utility Chance Card
3
Do you move forwards or backwards on the King's Cross Chance card?
4
Can you be sent to Reading Railroad without passing Go?